Can you believe high school football’s regular season is over already? The Letcher Central Cougars have roared through their schedule with an 9-1 record.

It’s now play-off time and this is what every player dreams of. It’s their chance to try to get to Louisville and play for the championship. First up is Whitley County. The Colonels lost in overtime to the Cougars earlier in the year and they will be itching to get another shot at Letcher Central. The winner of this game will play the winner of Perry Central and Clay County. Both of these teams are making noise and turning heads. Perry Central shocked Prestonsburg last week and is now 7-3 heading into the playoffs.

If the Cougars can put together four quarters they can really be dangerous and they should really be pumped up when Whitley comes to town.

Letcher Central’s final regular season win came this past Friday night against Lawrence County on “senior night.” The Cougars received the opening kick and started the game with a fumble that Lawrence County recovered deep in Cougar territory. The Cougars have started slow all year and usually after a few series they figure out the other team. 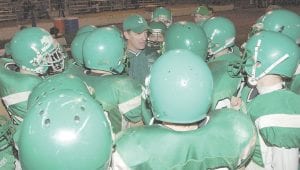 READY FOR PLAY-OFFS – The Jenkins Cavaliers huddled around head coach Mark Johnson Friday night during the Cavaliers’ 52-6 victory over Ervinton, Va., to close out the regular season. Jenkins will play the Cumberland Redskins this Friday (November 9) at 7:30 p.m. in the opening round of the Kentucky Class 1A Prep Bowl tournament at Cumberland. (Photo by Chris Anderson) Play-off time is here already

Lawrence County wasted no time with the turnover. Starting at the Cougar 30-yard line they passed to the 7-yard line and it was a first and goal. They moved to the one after a touchdown saving tackle by sophomore Chase Adams, but it was short-lived as Cam Hayes took it in for Lawrence County on the next play and it was quickly 6- 0. The extra point was no good.

The Cougars usually respond after a score, and this time they did again. After starting at their own 42, senior Ben Fisher picked up six yards and then quarterback Charlie Banks, junior, cut loose for 19 big yards and a first down at the Lawrence County 33. The Cougars continued to move and after getting to the 1-yard line, big Caleb Frazier (the wrecking ball) plowed in from there. Colton Cook nailed the extra point and it was 7-6 Cougars with 6:52 in the first quarter.

Lawrence County quickly moved out to the Cougar 45, but on the next play senior Dakota Brock caught a pass that was tipped in the air and come up with the big interception in Lawrence County territory. The Cougars moved down to the 25 after passes to Stacy Phillips and Dakota Brock, but on a first-down play the ball was fumbled by Ben Fisher and recovered by Lawrence County. They were not able to take advantage and were forced to punt.

The Cougars started at the 48- yard line after the punt, and Terry Tolson moved it to the Lawrence County 45. It was all Charlie Banks on the next play as he took off down the sidelines and after a few jukes he found the end zone. The point after was good and it was 14-6 Cougars with :29 left in the first quarter.

Lawrence County opened the second quarter with a big drive of their own as they moved down to the Cougar 21. A big hit by sophomore McKenzie Smith forced a fourth and 1. Lawrence responded with a big run to the Cougar 8- yard line and a first and goal. After a sack by Caleb Frazier, the ball was moved back to the 11- yard line. They converted from there as the quarterback found his target in the back of the end zone. The two-point conversion was good and we had a ballgame at 14-14.

The score stood until less than 10 seconds remained in the half. After moving to the Lawrence County 10-yard line, it was time for a field goal from Colton Cook, and he calmly kicked it through the uprights. It looked like it would have been good from 40 yards out. The Cougars took the 17-14 halftime lead and headed to the locker room for some chewing out.

The Cougar Marching Band’s seniors were honored at halftime in a nice ceremony, much as the football players and cheerleaders were honored before the game.

The second half started and both teams were held scoreless in the third quarter. The Cougars took control early in the fourth quarter as Charlie Banks took it in from five yards out after a big drive from the Cougars. Cook nailed the extra point and it was 24-14 with 10:55 left in the game.

Cook stepped up on defense on the next series and came up with a big interception after Lawrence County had moved down into Cougar territory. The Cougars would quickly put it out of reach as they moved down to the Lawrence County 10. Brock carried for nine and Tolson would take it in from one yard out. The point after was good and it was 31-14 and time to run out the clock.

The Cougars did just that and improved to 9-1 on the season in what has been a dream season for these kids. The Cougars were big on the ground on this night as they put up 247 yards on the ground led by Charlie Banks with 76 yards. He was followed by Ben Fisher with 62 yards, Dakota Brock with 56 and Terry Tolson with 51. Banks also had 93 yards through the air.