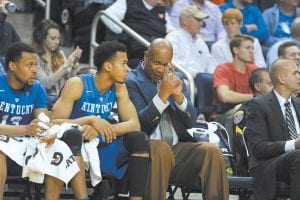 Instead of having to travel from Florida to Kentucky to see her son, Kentucky offensive lineman Nick Haynes, play as she usually does, DeDe Haynes will be able to stay in Florida to watch UK play in Saturday’s TaxSlayer Bowl in Jacksonville.

However, being in Florida for a bowl game is not what has her most excited about UK football.

“She was more excited that we beat Louisville (to end the regular season),” said Haynes. “That game was huge and don’t overlook that. But she just loves to see us play. For her, this bowl game is just another opportunity for me to play and any time I get a chance to play, she is excited.

“She loves where the bowl game is. It could not have been any better unless it was right in Niceville (where the Hayneses live). Not a better location for her, but she just loves that we are playing.”

He’s not sure how many family members/friends he’ll have at the game. His mother put together an initial list but then his father added to it.

“More people are getting on this train,” Haynes said.

He spent time at home with family and his newborn niece before driving to Jacksonville for UK’s final bowl practices this week. After the game, he’ll get to go back home to “hang out” more with family before heading back to UK.

When Kentucky started the season, his mother boldly took to Twitter to urge UK fans not to give up on the team. She’s been known to even remind media members during a game to not abandon her Wildcats.

“She is not one of those to say things now to those people who didn’t believe in us,” the junior lineman said. “She is a very humble person and taught me that, too. She would never do that. But at the same time, some of those people left the bandwagon and now they have come back.”

Indeed they have. That’s what winning seven of the last nine games and getting a Florida bowl spot on New Year’s Eve can do for a program. 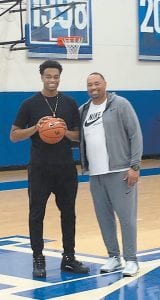 Kentucky signee P.J. Washington, shown here with his father, will be playing at Marshall County Feb. 17 and 18.

Haynes knows the offense needs to sustain drives and avoid turnovers against Georgia Tech, a team known for its running attack.

“We need a lot of sustained drives and lot of trips to the red zone because that is what they are going to be doing. We need to have long drives, too, to help our defense out. But we can do that,” he said.

That belief has been there since the fourth game of the season when UK lost to Alabama, the nation’s No. 1 team. After the game, Alabama coach Nick Saban and Tide defensive players praised UK’s physical play in the offensive line.

“We watched a lot of Alabama games before. Now we are not trying to say we are better. We got blown out, too. Up front I feel we took a different approach against Alabama. No one really went at them. We were the first team to really run power and downhill zones where we had to get physical with them. It was just nice to get a compliment about playing hard. That’s all you care about.”

Las Vegas forward P.J. Washington, a Kentucky signee, will be playing in Marshall County Feb. 17-18. It will be the only time the 6-8 Washington will play in Kentucky this season and be the best chance for UK fans to see him in person.

Other teams scheduled to be in Benton are Hillcrest Academy of Arizona that features 7-footer DeAndre Ayton, an Arizona signee; Prolific Prep and sensational guard Gary Trent Jr., a Duke signee; and Rock School of Gainesville.

Also coming back to Marshall County will be UK signee Shai Alexander, a guard for Hamilton Heights (Chattanooga).

Washington is considered one of the best, if not the best, rebounders in the 2016 recruiting class. He chose UK over North Carolina and Nevada-Las Vegas. He has a 7-3 wing span which helps make him such a dominant rebounder. Washington is a consensus top 20 player and five-star prospect who plays at Findlay Prep for his father, Paul.

Alabama signee John Petty, a former UK recruiting target who played in the Marshall County Hoop Fest in December, says Washington is one of the best power forwards in the country.

“He can just do so many things on the court. He has a great feel for the game. He’s tough to stop,” Petty, a wing player from Alabama, said. “His strength and his mind for the game are his strengths. He can see the floor very well. He is not only a power forward, but he can actually shoot the ball and he can handle the ball kind of well. He just has a great mind, vision and IQ.”

UT-Martin coach Anthony Stewart had a son play on the same AAU team as Washington. The coach called him “awesome” because of all he does.

“Kids like that get so much praise but they are humble and good people. He is ‘Yes sir. No sir. Thank you.’ He is a class act from class family. He is kid you love to coach and he is a great player,” Stewart said.

. Kentucky quarterback Stephen Johnson has enjoyed being able to tell recruits about the UK football program when they visit campus. He’s hosted several recruits and said he tries to provide each one with a player’s point of view about what to expect from the program.

“A lot of times coaches will tell you what they want you to hear. I am able to tell future players what to expect and about different situations from my perspective,” Johnson said.

He’s been just as open with those who have attended Fellowship of Christian Athletes meetings at UK with him.

“Growing up I was raised in a Christian family. I have kept those beliefs to this day,” he said. “I try to keep my faith first. Any opportunity I get to give my testimony and be a light, I do it.”

Saturday he’ll be leading Kentucky in the TaxSlayer Bowl against Georgia Tech.

His parents, brother and sister will all travel from California to be at the bowl game.

“They get the SEC Network at home. If they don’t get to come to games, they watch there,” he said. “They are excited. My sister has been telling me how happy she will be to see me play for the second time this year.”

His sister, Sydney, played on Southern Cal’s national championship soccer team. He admits she’s the best athlete in the family.

He said her hand-eye coordination “was not all there” and she seldom played football with him.

“But with her feet, she is tremendous,” Stephen Johnson said.

Could she outdo UK placekicker Austin MacGinnis, who had two game-winning field goals this year?

“With a football I am not sure, but with a soccer ball absolutely,” he said with no hesitation.

Freshman running back Benny Snell had 1,079 yards rushing in UK’s final 10 games after not getting a carry the first two games, both UK losses. He finished the season averaging 5.9 yards per carry and rushed for 13 touchdowns. That earned him freshman All-American honors.

“I think it helps us a great deal. I think it’s impressive to have a true freshman do that, and hopefully it will excite some other recruits to come here and have an opportunity to play early. It just goes to show you, because that’s a position we were very deep but the best players are going to play,” Kentucky coach Mark Stoops said.

Snell was not a four-star or fivestar prospect. What he could do is run with power and speed.

“I think Benny is another great example of where our coaches just did our evaluation of him and we were very excited about him all along. He’s been steady. He was steady with us through the process, and we were steady with him. It’s been very good,” said Stoops.

Snell says players are “excited” about Saturday’s bowl game and that this season was more than he ever imagined it would be for him.

“I knew what I could do and how hard I worked behind closed doors and how ready I was. I knew my opportunity would come and I showed what I could do, but I never expected all of this,” Snell said. “Guys are a lot more excited. We have more energy in practice now. Coaches are on us a lot more now. It is like a Louisville or Alabama game week. But it is fun.”

Snell said a chance to finish with an 8-5 season if UK wins the bowl game provides extra motivation.

“You know it will be different environment at the bowl, but it’s football and part of what it is. It is fun already,” Snell said.

Offensive coordinator Eddie Gran said he eventually knew Snell would get into the playing rotation because he kept getting better daily. But he admits he never thought Snell would become a 1,000-yard rusher or a freshman All-American during the preseason.

“It just, the way it happened, it worked out well for where we were and what we were doing. He has been terrific,” Gran said.

Kentucky’s assistant coaches are basically kept out of the spotlight and away from the media by coach John Calipari. However, Calipari is never shy about praising veteran assistant coach Kenny Payne.

“You come to work and sometimes I come in here at night, and I’m in here at 10, 10:30 p.m. and I look out the window and he’s out there working out somebody who wanted some extra work. I mean, his life (is) these kids. That’s his value,” Calipari said.

The UK coach says Payne has a “great basketball mind” but that he also devotes enormous time to the players.

“His life is these kids. You can’t fake that. In this profession I’m in, if you’re 9-5 you’ll have no relationship with these players. You get here at 8, 7 a.m. when no one’s here and then by 5 p.m. the door hits you on the butt, you run home and ‘I was here all day,’ no, doesn’t work,” Calipari said. “This thing is about the relationships you have with those players.”

Calipari says as head coach, his relationship is different with the players than the one Payne has. He says Payne relates well to recruits and comes across as a person parents can trust their sons with at UK.

Quote of the week: Kentucky linebacker Kash Daniel of Paintsville on if he could match the dance moves of UK Hoops sophomore Maci Morris of Bell County:

“I don’t need help to keep up with her. She can’t keep a rhythm. And yes, Maci, I am talking to you,” Daniel said.