Playing at UK is a no-brainer for Padgett’s son 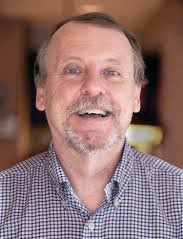 The 6-4, 285-pound center figured to attract even more attention after spring and summer camps as he had several big-time invitations to camps but those were all cancelled by COVID-19.

If that wasn’t enough, his father, former UK basketball standout Scott Padgett, lost his job as head coach at Samford in Birmingham and took a job on the New Mexico staff.

“We moved to New Mexico and then he did not get a football season at all (in 2020),” Scott Padgett said. “He was second-team all-state as junior and would have been preseason first team in Alabama and been on a good team. Knowing what I know now, I wish I had just told him and his mother to stay in Alabama for the fall, take classes to graduate and get a football season.

“Who knew COVID would keep going on like this and they are very strict in New Mexico. We got here August 1 and we have not sat down in a restaurant and ate yet. We ate on patios but not in restaurants.” 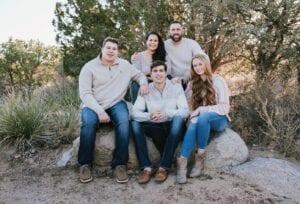 Lucas Padgett, left, will be a preferred football walk-on at Kentucky where his father, Scott, played basketball and his mother, Cynthia, played volleyball. Also pictured are Logan and Layla Padgett.

Obviously there has been no way to make visits to college campuses but Lucas Padgett knew where he wanted to go — the University of Kentucky. Not only did his dad play there and win a national title in 1998, but his mother, Cynthia Dozier, played volleyball there. That’s why he verbally committed to play football for UK coach Mark Stoops as a preferred walk-on.

Padgett’s current school, La Cueva High School in Albuquerque, N.M., may have a shortened spring season that could open other college opportunities, but Scott Padgett says his son was ready to be a Wildcat.

“Because he has been out of football, me and Cynthia talked to him about college. We have money put away for his education. We just told him we believed in him and you tell us where you want to go and we will try to make it happen,” Scott Padgett said.

“It was a no-brainer for him to go where he wanted. Nobody will say no to as good a player and teammate as he is. I asked him if he could go anywhere where would it be and he said he always wanted to go to Kentucky.

“I think UK is getting a steal that just fell in their lap. When he is done playing he will be a football or basketball coach. He’s really smart. He’s also too good not to have anything set for college. I did not want him to get left out and I just told him to do what he needed to do. We got together (with UK), talked, they watched his film, liked him and here we are now with him going to UK.”

Scott Padgett knows how good UK’s offensive lines have been the last five years. His son will also have family close by along with a lot of family friends.

“Everybody in our family is ecstatic. My parents, Cynthia’s brother and wife and son all live in Louisville,” Scott Padgett said. “All my friends are happy. A lot are Louisville fans but they are buying UK jerseys.”

Scott Padgett says his son, who played in the Blue-Grey All- American Bowl in January, is the “ultimate teammate” who picks guys up when they are down.

“He is really smart (3.93 grade-point average) and calls coverages. He gets hyped for guys when they make plays. He is the guy everybody likes being around. You won’t meet anybody who doesn’t like him,” Scott Padgett said. “He has a good personality. He’s really smart like his mom but the rest of him is a lot like me.”

Lucas Padgett does play basketball like his dad and older brother, Logan, who is a sophomore at New Mexico playing for his dad like he did at Samford last year.

“Lucas played basketball. He played with Logan for two years in Alabama. He played again last year as a junior and would have been a four-year varsity player if they had a season but there was no basketball season here, either,” Scott Padgett said. “He is straight post up, has a good hook hook. He can post or pass.”

Lucas’s father is glad he’s found his niche as a football player.

“It’s a way for him to make his own name and do his own thing,” said Scott Padgett, who is a native of Louisville. “He loves basketball but the way he is built he is ready-made to be a football player.

“I am just glad now his dream is becoming a reality. Kentucky is where he always has wanted to go. His dream was to play at Kentucky and then if he was good enough to play for the (Indianapolis) Colts. If you grew up in the Padgett family you were a little blue. My dad instilled Big Blue Nation in me. Maybe if I was a football coach he would want to play where I am coaching like my older son. But Lucas is all football and all Kentucky.” s

Kentucky recruiting target Brandin Podziemski, a 6-5 Wisconsin guard, has a close connection with the UK coaching staff. Podziemski’s AAU coach is Antonio Curo, who had the same role with former Wildcat Tyler Herro.

“Comparing him to Tyler is disrespectful to Tyler because he has busted his butt to create his own story,” Curo said. “Tyler is an advanced student of the game. He wants it and he loves it and he desires to be great. Whether Brandin gets to that point Tyler has, we’ll see. Brandin is very humble but he’s also a hard worker.”

Curo always thought Herro would be successful but thought he would likely be at UK two years, not just one year before he left for the NBA and stardom with the Miami Heat.

“It’s all about fit,” Curo said. “Kenny Payne was outstanding with him, did unbelievable job with him. It was a great fit for Tyler at Kentucky.

“Tyler got drafted by the perfect spot for him. Pat Riley is the perfect GM (general manager). He has the perfect coach and developed a great relationship with the veteran players there. Miami just fit for him.

“If he was being asked to score 40 points and the expectations did not fit, it would not work. But nothing Tyler does surprises me. Even if you were cautiously optimistic about Tyler, the thing about him that is different is that he believes in himself and pays the price to succeed every day.

“That work ethic sets him apart and he deserves all this success because he has worked for it. He believed in himself and his family believed in him. He’s doing fabulous and I could not be prouder of him.” s

ESPN NFL draft guru Mel Kiper says cornerback Kelvin Joseph is a “fast riser” in the upcoming NFL draft and has him projected as the No. 4 cornerback in the draft and possible first-round draft pick.

“He has ball skills and instincts to cut off passes and he’s tough in the run game, too. Joseph has all the tools to be a great pro,” Kiper said.

Joseph’s best game may have been in UK’s loss at Alabama when the Crimson Tide only targeted Heisman Trophy winner Devonta Smith twice when he was covered by Joseph. One deep pass was overthrown due to Joseph’s coverage and the second was intercepted by Joseph near the goal line.

“He (Joseph) has good ball skills. He has good hips and seems to have pretty good speed,” former all-SEC running back Anthony White said. “It comes down to how he changes direction. But the one thing they love in the NFL are ball skills. He has shown he can flip the chains and he will go up and get the ball.”

There were times Joseph’s “body language and actions” were not the best during the season. White said that does not “bode well” with some NFL personnel.

“They will have questions about that if he runs a 4.3, then somebody will take the risk in the first round,” White said. “If he goes high 4.4 or even 4.5, then stuff about why he decided to sit out the last two games and other things will come into play.”

Linebacker Jamin Davis is the highest rated UK player in other mock drafts after deciding to give up his final season at Kentucky to turn pro. White likes his upside a lot.

“Jamin shows a lot of athleticism and playmaking ability and can play the pass or run,” White said. “The NFL questions everything that you do and breaks it down to the smallest of things about which guy is better doing what.

“You cannot overcome things if you have exceptional speed or film. If you have that speed, you go high in the draft. Jamin has a lot of upside. I think he will last a long time in the NFL.” s

Because of last week’s winter storms, coach John Calipari’s team spent a week in Tennessee. The Cats left Lexington early for a Wednesday game at Vanderbilt and then stayed in Tennessee until after Saturday’s win at Tennessee.

Kentucky assistant coach Bruiser Flint said being on the road a week was not that hard on players, especially with the COVID protocols they have had this year, as long as practice facilities were available and UK had no problems with that.

“These kids today. It’s not like the old days where you went outside. These kids they plug up stuff on their TV. They can entertain themselves, believe me, for hours on end without being outside,” Flint said. “I mean it’s tough. We had to leave, and it was a last-second thing, last-minute thing to get everybody together and go.

“But it was a smart thing to do looking at the weather and everything.”

It was also a smart way to help team bonding, something UK had missed this season with COVID protocols, as shown by the 15-point win at Tennessee. s

While the UK men’s basketball team is not having the season most expected, the Kentucky women’s swimming team is having a historic season and won its first Southeastern Conference Swimming & Diving Championships last week.

“We’ve been building this over a few years now. The alumni from years past established it, our coaching staff, our administration. So many people had terrific efforts this weekend, it was really fantastic. I couldn’t be more thrilled for our institution and for our girls,” coach Lars Jorgensen said.

Caitlin Brooks had third-place finishes in the 100 and 200 backstroke along with Izzy Gatti in the 100 butterfly and Kyndal Knight in platform diving. The 200 medley and 400 medley relay teams both placed third.

Gaines and Davey — who both set school records — both reached automatic qualifications for the NCAA Championship along with three relay teams.

“We got our trophy and we all jumped in the pool to celebrate,” Gaines said. “Last year we got to see Tennessee do it and had kind of been bitter thinking about their celebration. It was awesome that we got to do it.”

The celebration included Kentucky athletics director Mitch Barnhart jumping in the pool with the team and coaches.

“He showed up for the last session Saturday night. We had no clue he was coming and it was super special,” Gaines said. “Just seeing him there was special but seeing him jump in the pool with us was so cool.”