Playing with Reed ‘scary’ for Metallica 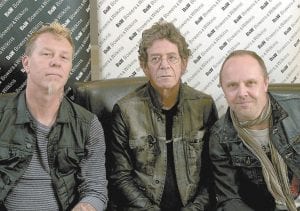 Metallica and the word “scared” don’t usually go together.

But fear was one of the emotions that band members felt when they began work on their latest album, “Lulu,” a collaboration with Lou Reed that is out this week.

“That was scary, but it was also so exciting to think, ‘Is he going to tell us what to play? Are we going to know what to play? Is he going to start singing randomly? Should we figure out some parts?’” lead singer James Hetfield said in an interview. “We have had many different ways of recording, and this is yet another new way for us.”

Reed and Metallica, both members of the Rock and Roll Hall of Fame, first performed together at the hall’s 25th-anniversary concerts in 2009. They found that they had amazing chemistry together.

That chemistry prompted them to go into the studio together, but the concept for the album started as a work that was the brainchild of Reed, based on the “Lulu” plays (“Earth Spirit” and “Pandora’s Box”) written by Frank Wedekind.

“This was the template from God,” Reed explained in an interview Monday night with Hetfield and Lars Ulrich. “It was written for a play in Berlin, for the Berlin Ensemble Theatre. It was done there as a soundscape surrounded by various electronics. I lifted the whole thing, since it is mine, and brought it over to them and turned them loose on it so that on top of the electronics, (it) became Metallica.”

Ulrich said most of the album was recorded in four days.

“We had no idea what hit us, so it was a lot about just being in the moment and playing with each other and giving the impulsivity a chance to be the predominant thing instead of thinking,” the Metallica drummer said. “It was a more physical experience than a mental experience.”

Reed, inducted into the Rock Hall as part of the Velvet Underground, has worked with everyone from The Killers to David Bowie, but considers his work with Metallica to be “the best music I have ever done.”

So far, reviews have been mixed. But Reed insists that he doesn’t care what the critics say. “I wouldn’t care what a critic said about anything, including a hamburger joint. There is no species of people I have less respect for.”