Plenty for which to be thankful

This week, events and people in sports for which I am grateful:

1. Since the critics of Joker Phillips “really want him to succeed” … and because the opponent wears orange and is beatable again (and because Saturday is Kentucky’s bowl game) Big Blue Nation will show up in big numbers at Commonwealth Stadium. Right?

2. Relief and new hope. Relief that Joker’s team won’t be one of the woeful teams with 6-6 records headed to a bowl game. New hope … early start on recruiting (JUCOs?).

4. As college basketball gears up, fans across Kentucky will pause and be thankful for the caliber of play in our state. Two defending national champions, Bellarmine and Pikeville, a Final Four team, Kentucky, and three top ten ranked teams this season – Kentucky, Louisville and D-2 No. 1 Bellarmine.

5. Joshua Jude at Johnson Central is the rushing yardage king in Kentucky. Come Thanksgiving 2050, his grandchildren will stare in wonderment as Grandpa explains those 8,633 yards, or 25,899 feet, or “just a shade under five miles.” Now, about those scholarship offers … 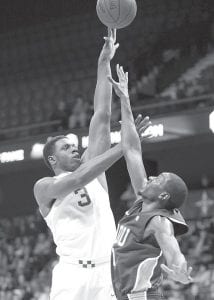 Kentucky’s Terrence Jones, shown here scoring over Old Dominion on Sunday, deserves our thanks for saying no to professional basketball this season and helping to improve the caliber of play in the state. (AP)

6. Sacrifice for school and team. Yale University quarterback Patrick Witt opted out of a Rhodes Scholarship final interview to be with teammates in “The Game” against Harvard. In front of 55,000 fans, Yale lost 45-7.

7. Purists and patriots have another Army-Navy game to enjoy, December 10.

8. Mike Krzyzewski said no to NBA offers, stayed on in Durham and has elevated college basketball while becoming the game’s top coach in wins. Coach K’s sharing credit last week to include mentor Bob Knight showed he understands the value of grace and protocol.

Footnote: On March 28, 1992 in Philadelphia, Duke beat Kentucky on Christian Laettner’s miracle shot. Coach K walked across the floor, asked Cawood Ledford for his microphone and then lavished praise on Big Blue Nation.

9. Coach K’s early days at Duke could be a reminder to the Joker Phillips critics at Kentucky. Two seasons in at Duke, fans howled for Krzyzewski to be fired because he was “in over his head.”

10. Top draw for your entertainment dollar, college and high school basketball in Kentucky. Buy a ticket or tune in a game on radio near you.

12. The horseshoe that is college hoops’ 3-second lane is good for the game.

13. Fun sidelight: Will upstart successors to Butler and Virginia Commonwealth be Belmont and Middle Tennessee State?

14. Kentucky fans have marked February 25 on their calendars. Billy Packer’s birthday. Where is Big Blue Nation’s favorite college TV analyst these days? Millionaire Packer gets $10,000 to $20,000 per speaking engagement.

16. Jared Sullinger, Harrison Barnes, Terrence Jones, Perry Jones and a handful of college players said no to the NBA. Meanwhile, (spin it however) ex-UK guard Brandon Knight and pals sold themselves out and sit in limbo this winter, brave-faced and unemployed.

18. Upside of NBA absence? Frequency of Larry Bird’s 50 Greatest Highlights followed by “how Magic and Larry saved the NBA” telecasts. This is entertainment.

19. For his impact on college football, thank you, sir, to retiring Kentuckian Howard Schnellenberger.

20. Richie Farmer won’t be available to kick around anymore. Rick Pitino WILL be available again for Kentucky fans to kick around. (A fact on Farmer to the Louisville and Lexington newspapers: While he was Mr. Basketball 1988 and an icon in eastern Kentucky, Farmer was no star at UK. His best season as a Wildcat was a pedestrian 10.1 points per game in 1990-91. Look it up.)

21. Thanks for your best all the time, Danny Trevathan and Bobby Rainey.

22. If an award were titled “I’m thankful to be here even though I am dumb and stupid,” it would go to University of Missouri head football coach Gary Pinkel. Amid a rash of bad behavior by college coaches in recent weeks, Pinkel got himself arrested for driving while intoxicated. Good news is Pinkel didn’t hurt anybody, his pay check is $41,000 lighter, and Mizzou froze his salary for a year.

23. The subscribers and advertisers of this newspaper. Thank you for your loyalty. Happy Thanksgiving.

24. Johnny Cox, who will be 75 this month. An authentic icon in eastern Kentucky, the UK All- American has his number 24 hanging in Rupp Arena and a national title memory.

That Johnny Cox came along when he did and was the superb player he was is a blessing. That he is with us still makes it doubly so.

And, finally, I am thankful for Cade Asher Hottman, who arrived on 11/11/11. Nine pounds, seven ounces, he is our first grandson.