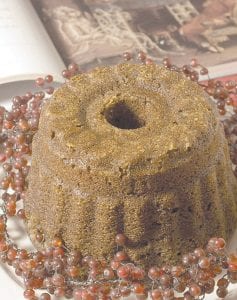 Steamed Plum Pudding is shown in this photo. (AP Photo)

Traditional recipes for steamed plum pudding are enough to make a Scrooge of even the merriest cook.

Often calling for days — sometimes weeks or months — of prep and careful nurturing (puddings were considered at their best only after aging), it’s no wonder the denizens of Charles Dickens’ “A Christmas Carol” were such a miserable lot.

This streamlined version simplifies the prep with the help of a food processor. This approach may not induce the sort of suffering key to Dickens’ plots, but it will get this tasty treat on the table a lot faster.

The inspiration for this shortcut version came from a recipe in an 1861 cookbook written by Eliza Acton, an influential food writer from Dickens’ era.

Steamed pudding molds are widely available online, most selling for about $20. These resemble small fluted cake pans with tight-fitting covers designed to keep moisture inside during cooking.

Alternatively, if you don’t have a steamed pudding mold, a large metal coffee can can be used. You will need several layers of foil and kitchen twine to cover and tightly seal the can during cooking.

And true to original recipes, this pudding improves with age. It’s delicious right from the oven, but if you let it sit overnight (refrigerated or not) it becomes dense, chewy and richly delicious.

In a large stockpot, bring 3 to 4 quarts of water to a boil. Coat the inside of a 7-cup steamed pudding mold with cooking spray, then add the granulated sugar and shake to evenly coat the sides and bottom of the mold.

In a food processor, pulse the bread until reduced to fine, soft crumbs. Add the flour, salt, baking soda, nutmeg, cinnamon, cloves, allspice and mace, then pulse several times to mix. Transfer the mixture to a bowl.

In the food processor, combine the eggs, shortening, brown sugar and molasses. Process until smooth, scraping the sides of the bowl as needed. Add the raisins, currants, prunes and orange extract. Pulse until the fruit is chopped, but not pureed.

Return the dry ingredients to the processor and pulse just enough to thoroughly mix them with the wet ingredients. You likely will need to scrape down the sides of the bowl once or twice between pulses.

Transfer the mixture to the prepared mold, then tightly seal with the cover (or with several layers of foil tied tight with twine). Place the mold in the stockpot; the water should come about halfway up the mold.

Cover the stockpot and lower the heat to maintain an even simmer. Steam the pudding for 2 hours. Remove the mold from the stockpot, uncover the mold and let cool for 15 minutes.

Unmold the pudding by inverting it onto a plate. If desired, drizzle the pudding with brandy, then slice and serve topped with whipped cream.