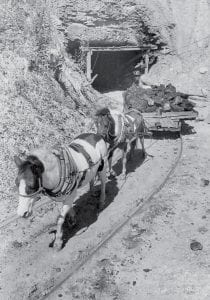 Ponies were still being used to pull cars of coal out of small deep mines when this photo was made in Letcher County during the late 1960’s.

When I first started selling GRIT newspaper back in the 1950s, Dad was employed by a mining company operating in the head of Blair Branch that used ponies to pull coal cars into and out of the mines.

We had the last barn in the head of the hollow and it had six big stalls on the ground level that would comfortably house two ponies each. In addition to working underground, Dad was also paid a fee to house and board the ponies. I can’t remember the barn being full, but for several years we kept six or eight ponies at the same time and finally got down to the last two that were used for mining in Letcher County when the practice was outlawed in the early ’60s.

Notice I said that “Dad was paid.”

Yours truly and brother Keeter did all the feeding, watering, and washing down the ponies on weekends as well as cleaning manure out of the stalls on a regular basis. We actually thought, except for the bathing, that this was great fun and couldn’t imagine why anybody would be paid to do it.

On weekends boys on Blair Branch and even neighboring hollows would come around to ride the ponies, most of which were none too keen about having anybody on their backs and did more kicking, bucking and biting than actually transporting riders from one point to another. But the deal was that the rider had to bathe his pony in the branch and then curry him down before being allowed to ride. Tom Sawyer would have been envious of this trick.

However, a couple of ponies that we kept for several years were extremely gentle and loved having all the attention Keeter and I could lavish on them. My favorite was Old Red, a wonderful Shetland that was big for his breed who actually thought he was a riding dog.

For a couple of years, especially in warm weather, when I was in sixth and seventh grades or thereabouts, I would ride him about three miles from our house to the Jeremiah Post Office and deliver GRITs on the way home over a meandering route that covered about six miles or so up Spring Branch, Doty Creek, Adams Branch, Black Bottom and finally to the head of Blair Branch.

I’d stop to rest in front of Adams Brothers General Store and Doc Lundy’s office there below the mouth of Adams Branch and sell the extra 10 papers in a matter of minutes to store customers or patients who couldn’t resist shelling out 15 cents to a boy selling papers off a pony’s back. Without Old Red, I couldn’t have given them away.

I used to get jealous because store customers would run in and buy Red an apple or a carrot just to let him eat it out of their hands, but I can’t remember anybody ever offering me one.

Throughout my GRIT career I had one regular customer who was blind, but she’d be out on the porch even in cold weather waiting for her paper. GRIT always had a serialized Western novel going that was printed in weekly installments. Truth be known, that was the reason most people bought the paper in the first place.

Anyway, she’d buy the paper and then make me sit down and read aloud that week’s installment to her. And anybody that came into her house had to do the same thing until she had the tale nearly memorized before I came back around.

I’d hand her the paper in July and August and she’d say, “I can’t wait for it to get cold so you can’t ride that danged old nag.”

“I don’t care what he looks like but you oughtn’t to be delivering papers on him in hot weather and you ought to give me a nickel off,” she’d grump. “Nobody wants to read a paper that makes the whole house smell like a sweaty old mule.”

Loretta came in the other day with a GRIT delivery bag that looked nearly new.

I took it off the hanger where she placed it on the kitchen wall and smelled of it.

“What on earth are you doing?” she wanted to know.

“Just checking to see if the kid who used it rode a pony,” I replied.

Loretta looked skyward and rolled her eyes around. “I don’t even want to know,” she said.

“You wouldn’t understand anyway,” I told her as I hung the bag back up.