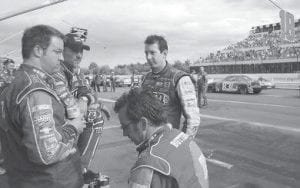 Kyle Busch waited with his crew on pit road during a rain delay in the NASCAR Sprint Cup Series’ Pennsylvania 500 auto race at Pocono Raceway in Long Pond, Pa., on Aug. 3. Busch ran out of gas and wound up a frustrating 36th. (AP Photo)

The Sprint Cup Series points leader ran out of gas Sunday and wound up a frustrating 36th. As miserable as the final result was, it was still an improvement over his last-place finish there in June.

He bounced back from that accident-ending first visit to Pocono, reeling off three wins in the five races that followed. Whether he can do it again — or will even try — remains to be seen.

Busch and his Joe Gibbs Racing team have a decision to make over the next five weeks: they can try to reclaim the momentum Busch has used all season while earning a series-best seven Cup wins, or they can start planning and preparing for the Chase for the championship.

Jimmie Johnson took the latter route the past few years as he and crew chief Chad Knaus used this part of the schedule to finetune their Chase package. Although it cost them victories in August, they were rewarded with back-to-back championships the past two seasons.

But patience is hardly one of Busch’s virtues, and trying to get NASCAR’s resident wild child to rein it in for a monthlong test session could be an impossible challenge.

“I am not so sure he’s capable of backing off,” team owner Joe Gibbs said. “I think he’s kind of got a mind-set — which I think is the best way to race for a championship — to go after it every week. We wouldn’t want to have him do anything other than try to win every race.”

Fortunately for Busch, the points system encourages him to do just that.

Since NASCAR implemented a 10-point bonus last year for every “regular season” victory, there’s a renewed emphasis on racing for wins rather than top- 10 finishes. Busch already has a series-best 70 bonus points he’ll roll into the Chase, and his closest challenger is Carl Edwards, who now has 30 bonus points after Sunday’s win at Pocono.

Edwards should actually have 40 bonus points, but he was docked 10 after his race-winning car in Las Vegas failed inspection. But in closing the gap at Pocono, Edwards took some of the shine off of Busch’s comfy lead by becoming his closest current Chase challenger at just 40 points back.

But is Edwards’ sudden surge — he’s got a win and a pair of second-place finishes in the past four races — enough to put a panic in Busch? Or maybe force crew chief Steve Addington to contemplate strategy over the rest of the month?

Gibbs is correct in doubting Busch can pull back a bit and focus on the bigger picture. For all the strides the 23-year-old has made this year in maturity, he’s still a moody driver who is deeply effected by his on-track performance.

“I’m not a happy person when I’m not running well,” he admitted.

And that’s putting it politely.

When Busch is winning — and he’s done so a NASCARrecord 15 times this season spanning three different series — he gains both a swagger in his gait and a mind-set that’s he’s unbeatable. That’s how Addington needs his driver when the Chase starts in September.

Quelling his momentum through big-picture planning risks sending Busch into the championship run without the mental edge he’s held over the competition most of the season.

Busch seems to think he can be conservative — once the Chase begins. But until then, he doesn’t want to stop racing for wins. And now that he’s in contention for Jeff Gordon’s record of 13 Cup wins in a season, Busch wouldn’t mind making a run at the mark.

“You try to look forward at things and hopefully you can say that 13 is reasonable,” he said. “It was pretty cool growing up and watching him and those times when he was able to run well and get those marks and think of the unbelievable seasons that he was having watching him when I was a kid.

“If there’s a shot for it that would be pretty cool.”

That would mean Busch needs to be aggressive the next five races, and maybe even during the Chase. Wins take a back seat to solid runs during the 10- race title hunt, and Busch insists he understands that.

“When the Chase starts, there’s going to be a different race going on,” he said. “There’s not going to be the race of going out for wins and doing pit strategy things and stuff like that which will take your chance out of a good top-10 or a good topfive. You just have to be consistent and stay up there in order to get those finishes.”

But as soon as the words are out of his mouth, Busch contradicts himself. Known for making spectacular moves to gain a position or two on the track, he admits he won’t be able to abstain from doing that during the Chase.