Police: Bypass accident could have been much worse 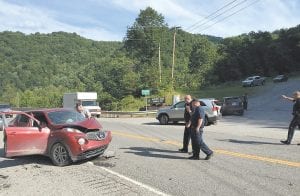 Some of the drivers and passengers involved in a three-car crash near the Whitesburg hospital early Tuesday night were injured,but none critically, Whitesburg City Police said. Autos involved in the accident, which occurred at the entrance to baseball-busy Earnest Cook Memorial Park, were a Nissan Juke (left), a KIA Sorrento (center), and Ford Edge (right). Police were still investigating the accident at press time Tuesday night and were unable to release names of the drivers and the nature of the injuries suffered.