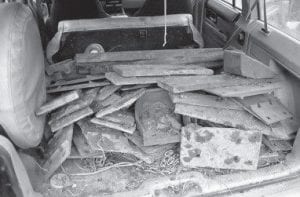 Two men and one woman were arrested after Sheriff ‘s Lieutenant Brian Damron found this load of railroad steel in the vehicle in which they were traveling on October 25.

Three persons have been charged with stealing rail steel.

Earnest R. Adams, 36, of Ky Highway 588, UZ; Dawn Adams, 37, of 4134 Highway 588, Ermine; and Steve A. Sandlin, 31, of 203 Raymonds Branch, Whitesburg, were arrested Oct. 25 and charged with receiving stolen property. Earnest Adams was also charged with driving on a license that was suspended after a driving under the influence charge.

According to court records, Lt. Brian Damron of the Letcher County Sheriff’s Department saw a green 1993 Dodge Intrepid being driven by Earnest Adams loaded down with about 1,000 pounds of steel which appeared to have been taken from a railroad. Sandlin and Dawn Adams were passengers in the Intrepid.

Anyone with information about the theft of railroad steel is asked to contact the sheriff’s department at 633-2293.