Police chief says juveniles thought it ‘would be funny’ to vandalize on Pine Mtn. 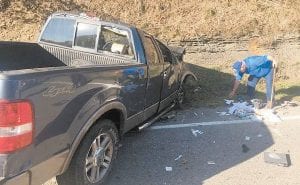 PICKING UP THE PIECES — Letcher Fire Department Personnel Director Gary Rogers picks up pieces from a pickup truck that ran into the back of an SUV at Isom on Friday. Police say the accident occurred after the driver of the truck became distracted. More information appears inside. (Photo by Sam Adams)

Charges are pending against two teenagers police say painted their initials and the date on a new observation deck on Pine Mountain.

Police did not release the names of the teens because they are juveniles.

“They thought it would be funny to make their mark by being the first ones to write on it,” Fields said.

The decks were only begun a few days before, and were not yet completed when the vandalism occurred.

Fields said no others were involved as far police know.

“They won’t think it’s funny when they’re up there picking up garbage and doing community service,” he said.