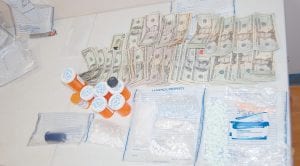 Evidence collected at home of Bobby Briggs is seen here.

Police have confiscated more than $13,000 in cash and 475 pills from a Kona residence.

“When we made entry into the residence, a drug deal was actually in progress,” Letcher County Sheriff ’s Lt. Brian Damron said of the January 18 raid.

Bobby Briggs, 37, of 166 Bill Lewis Hollow, ran into a bathroom on the back side of the house to try to flush controlled substances he had in his hand, Damron said.

According to information included in an arrest citation, Damron deployed a Taser to try to keep Briggs from flushing the contraband. Damron and then tackled Briggs in a bathtub, after which Briggs began kicking Damron, the citation said.

Damron said he found the painkiller oxycodone in the floor where Briggs had dropped it. The other controlled substances and cash were found in a bedroom area. 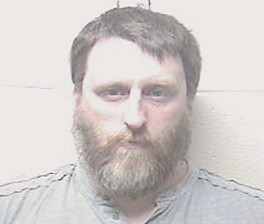 Briggs was being held in the Letcher County Jail on Tuesday. Bond is set at $25,000.

Damron said the investigation which led to the arrest of Briggs began after the sheriff ’s department received numerous com- plaints about him selling drugs.

Assisting in the execution of the search warrant were Travis Cantrell, Jarrad Hipps and Matt Gayheart, all deputies with the sheriff ’s department, and Sgt. Randy Surber, Trooper Adam Hall and Trooper Michael Burton of the Kentucky State Police.