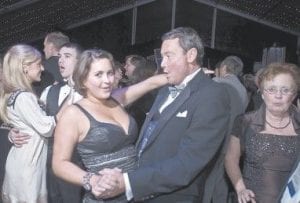 A one-time Kentucky political star whose reputation was tarnished by an ex-girlfriend’s domestic violence allegations told police of wanting revenge when he was arrested in a cemetery hours after she was shot to death.

Republican Steve Nunn, who had aspirations of using what one lawmaker called his family’s “magic name” to follow his father into the governor’s office, instead sat Tuesday in a rural jail cell after being charged with murder the previous night. He was arrested Friday by police investigating the death of the woman who had months earlier accused him of attacking her — and cost him his job in state government.

Nunn lamented that he lost the job because of a domestic violence case and couldn’t get another when officers found him with selfinflicted wrist wounds near his parents’ graves in a rural cemetery, according to arrest documents filed late Monday. Nunn, however, stopped short of confessing to the woman’s slaying, Lexington Detective Todd Iddings said in the affidavit.

Iddings wrote that Nunn talked of revenge and said of the suicide attempt that “he was sorry for not completing the job.” The son of former Republican Gov. Louie Nunn was treated for the injuries at a Bowling Green hospital before being moved to the jail in Hart County, about 100 miles southwest of Lexington.

The former state lawmaker has also been charged with violating a protective order taken out by 29- year-old Amanda Ross, whose body was found outside her Lexington town home.

“She was scared to death of the guy,” said Dale Emmons, a longtime friend of the Ross family. “She told me multiple times that he was going to do something to hurt her.”

Asked about the murder charge, Nunn’s attorney, Astrida Lemkins, replied, “The case will be tried in the courts and not in the press. Our sympathies are with the Ross family for their loss. We don’t want to create a circus atmosphere and we’ll keep our comments to a minimum.”

She said Tuesday she spent several hours with Nunn at jail and that he’s was aware he could face the death penalty if convicted. Nunn, who most recently served as deputy secretary of the Kentucky Cabinet for Health and Family Services, also faces multiple counts of wanton endangerment after officers say he brandished a handgun towards them Friday.

The charges represent a shocking low for a man once considered a star of the state GOP. Republican state Rep. Lonnie Napier of Lancaster said Nunn bore a “magic name” in Kentucky politics, and backed it up with a reputation around Frankfort, the state capital, as a hard-working and compassionate lawmaker.

Nunn spent 15 years as a state representative until losing a bid for re-election in 2006. He also ran unsuccessfully for the GOP gubernatorial nomination in 2003.

“Steve looked to be a rising star at that time,” Napier said by phone Tuesday.

“I think when his daddy died, something happened to Steve,” Napier said. “I believe he started going downhill at that time. It’s a sad situation on both sides, both families.”

Nunn returned to state government in 2007 as deputy secretary of the Cabinet for Health and Family Services, but was put on administrative leave in February after he was charged with domestic violence. He resigned in March.

Fayette County court records show that Ross had a protective order stemming from the domestic violence charge that was in effect through March 2010. The order also required that Nunn not have any firearms.

Ross claimed in the February complaint that Nunn became violent during an argument at her home and hit her in the face four times. The complaint also said Nunn pushed her against a wall, broke a lamp and threw a cup of bourbon at her.

Nunn said at the time that Ross blocked him from leaving her apartment, struck him in the face and threw him into the lamp.

Iddings said that Nunn spoke in derogatory terms about Ross in a letter found in his car after his arrest and told investigators that “he was at the end of his rope and wanted revenge.” Troopers found him at the Cosby Methodist Church cemetery in Hart County. When they approached, Nunn fired one shot from a 38. caliber revolver, the same caliber that was used to kill Ross, Iddings said.

The detective said Nunn declined to answer questions regarding the Lexington slaying.

“When asked directly if he caused Ms. Ross’ death, he either evaded answering the question or advised he did not want to answer that question,” Iddings said.

Ross was director of financial standards and examination for the Kentucky Department of Insurance. Co-worker Rhonda Sloan described her as “a dear friend and a valued employee.”

“She was an extremely bright and talented woman with a wonderful sense of humor,” Sloan said.