Police say accused murderer has son and is on the run 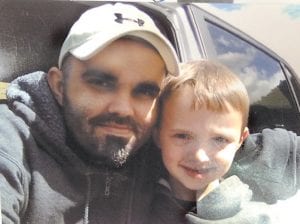 Police have released this photo of Floyd Junior Sexton, left, and his young son, Nicholas Sexton.

Police are looking for an eightyear old boy and his father who haven’t been seen in Letcher County since October. The father is also wanted in the November murder of a Floyd County man.

“On October 16, Lillie Mae Adams came to the sheriff ’s department and stated that a few days prior her son and grandson were living with her,” said Engle.

Adams told police that Floyd Junior Sexton had custody of his son, but that as part of the agreement her son and grandson were to live with Adams at her house, located at 186 Allen Branch in Whitesburg, Engle said.

Adams couldn’t produce documentation proving that as part of the custody agreement the Sextons were to live with Adams, Engle said. She did obtain an emergency custody order signed by a judge, but it hasn’t been served.

Engle entered Nicholas Sexton and Floyd Junior Sexton into the National Crime Information Center (NCIC) system as missing persons, but an Amber Alert wasn’t issued because the child was not abducted and the father has custody.

Three or four weeks after the Sextons were entered into the NCIC system, police in Letcher County were informed that Floyd Junior Sexton was in Prestonsburg, but police didn’t find him.

Engle said it is likely that Floyd Junior Sexton and Nicholas Sexton are out of state.

Only a few months later, Sexton was released from prison and placed on supervised probation beginning August 1 and ending in June 2017. He has since been declared “absconded” by the Kentucky Department of Corrections.

Police later arrested John Tate Maggard, 28, of McRoberts and charged him with complicity to murdering Collins, of Leburn. Floyd Junior Sexton is wanted for murder in the case, while a woman, Jennifer Gayle Jernigan, is being sought on a complicity to murder charge.

The Floyd County Times reported on November 26 that Maggard helped Sexton wrestle with Collins as the two suspects allegedly attempted to hold Collins in a vacant house. Police say Sexton later shot Collins two times and left the scene in a vehicle driven by Jernigan.

Anyone with information on the whereabouts of Nicholas Sexton or Floyd Junior Sexton is asked to call the Letcher County Sheriff ’s Department at (606) 633-2293.