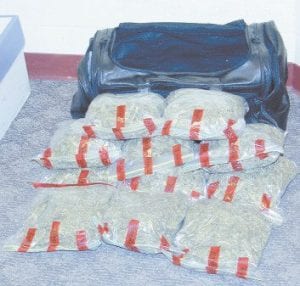 The Letcher County Sheriff’s Department says these 11 bags of marijuana were found hidden in a black duffle bag in a Ford Explorer on Turkey Creek at Linefork.

The Letcher County Sheriff’s Department has seized 11 pounds of processed marijuana from a home in Turkey Creek.

Claude E. Elderidge, 49, of 2702 Turkey Creek Road, was charged with trafficking in more than five pounds of marijuana.

The sheriff’s department said it began investigating Eldridge after being told that around the middle of each month Elderidge, while driving a Ford Explorer with a Tennessee license plate, would deliver six to eight pounds of marijuana to his mother’s residence in Turkey Creek.

On March 11 the sheriff’s department received information that Elderidge was allegedly at the home on Turkey Creek with an undisclosed amount of marijuana.

Sheriff ‘s Deputy Brian Damron and Troopers James Sandlin and Bo Cure with the Kentucky State Police K-9 Unit searched the residence and the vehicle after being given consent to search. Eleven pounds of processed marijuana were found in a black leather duffle bag in the back of the vehicle.

Damron wrote in his police report that when the marijuana was located Elderidge said, “You’ve got me.”

Lieutenant M.K. Terry of the Letcher County Sheriff ‘s Dpartment has charge of the investigation.

Elderidge is being held in the Letcher County Jail. Bond is set at $25,000 cash.