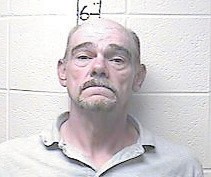 A Jenkins man was arrested last week after police found a stolen brass grave marker in his sport utility vehicle.

Letcher County Sheriff Danny Webb said he had received complaints that Wyatt had been trying to sell the grave marker, which was in two pieces, to scrap dealers.

“It’s illegal to have it, because someone stole it off of a grave,” said Webb.

Wyatt told Lt. Brian Damron of the sheriff ’s department that he didn’t know it was illegal to have the marker. Wyatt also admitted that he tried to sell the marker, according to a written citation.

Wyatt was still being in the Letcher County Jail Tuesday night.

Webb doesn’t know from which cemetery the grave marker was taken.

Anyone with information about the grave marker is asked to contact the sheriff ’s department at 633-2293.