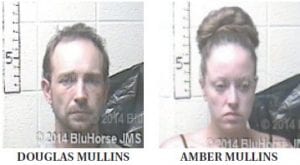 During a preliminary hearing scheduled for Thursday, a married couple will answer to charges related to allegedly having methamphetamine in a car the couple is accused of stealing from the wife’s mother. The couple is also accused of breaking into a Payne Gap home belonging to the husband’s uncle.

Amber D. Mullins, 28, and Douglas A. Mullins, 37, have both been charged with second-degree burglary, possession of a controlled substance, manufacturing methamphetamine, unlawful possession of meth precursor, use/possess drug paraphernalia and receiving stolen property over $300.

When police arrived at 778 Highway 3400, Amber Mullins was sitting in a 2001 silver Chevy Cavalier and Douglas Mullins came out of the residence, Assistant Jenkins Police Chief Crystal Davis said in a citation.

The back door of Allen Mullins’s residence was taken completely off the frame and the front door had pry marks, Davis said.

Davis ran the tag number and the car had been reported stolen by Amber Mullins’s mother, who lives in Virginia.

Found in the trunk was a red and white flip top Newport cigarette pack containing a white substance a Kentucky State Police detective identified as the finished product methamphetamine, according to a court document.

Davis found in the trunk of the car a black bag containing a small Gatorade bottle with a white powdery substance with black specks in the powder, according to the citation. Tubes, funnels, lithium batteries, Sudafed and starter fluid — all items used to make methamphetamine — were found in the car, Davis said in a citation. A clear liquid substance was in a Coca Cola bottle also found in the trunk, said Davis.

A screwdriver, a nut driver and several other tools were located beside the car and in the back seat of the car were several items possibly stolen from the residence, Davis said.

The Mullinses remain in the Letcher County Jail. Bond is set at $10,000 cash each. A preliminary hearing is scheduled for 1 p.m. on Aug. 28.