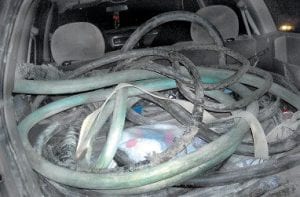 CHARGED WITH RECEIVING STOLEN PROPERTY — Sheriff’s Lt. Brian Damron said Donny R. Sexton, 27, was arrested and charged with receiving stolen property when workers at a deep mine spotted this mining cable in the back of Sexton’s disabled Jeep at Sandlick.

If you’re traveling with stolen copper in your Jeep, don’t return to the place from which the copper was stolen to ask for help with moving your disabled vehicle.

That’s the lesson that was delivered to a 27-year-old Letcher County man who was arrested on Halloween night for being in possession of copper wiring stolen from an underground mine site at Sandlick.

Donny R. Sexton, of 5067 Highway 931 North, Whitesburg, was arrested by Lieutenant Brian Damron of the Letcher County Sheriff ‘s Department shortly after midnight on Oct. 31 and was charged with receiving property stolen from Sapphire Coal Co.’s Sandlick No. 2 mine.

Damron said the mine’s third shift foreman, maintenance chief and outside man contacted police after Sexton approached them at the office of the Sandlick job site and asked for help to move his Jeep Cherokee from the bottom of the hill. Sexton is a former employee of Sapphire.

Damron said the Jeep contained several hundred feet of mining cable worth approximately $1,500. Damron said the wiring had been cut and had been taken recently from the mine site.

Damron is continuing to investigate the case.