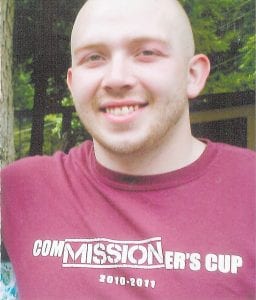 Michael Shane Hogg, 24, was stabbed to death in downtown Whitesburg early New Year’s Day. He was a student at Eastern Kentucky University.

A 24-year-old Whitesburg man who was killed in an early New Year’s Day knifing was held down on the ground by one suspect who has been charged in the case while another suspect stabbed the victim eight times, authorities say.

Kentucky State Police say Patrick Smith, 27, of the Greasy Creek area of Pike County, pinned Michael Shane Hogg to the ground while 34-year-old James Richard Huffman IV, also of Pike County, stabbed Hogg to death during an altercation near a parking lot above the old Whitesburg Post Office on Hayes Street, also known as Back Street.

Hogg, a Kingscreek native and Letcher County Central High School graduate home on winter break from Eastern Kentucky University in Richmond, suffered six stab wounds in the back, one in the chest and one in the neck, officials say. He was pronounced dead on arrival at the Whitesburg ARH hospital shortly after the incident occurred around 2 a.m. last Wednesday.

Smith, a Marine veteran who served in the Middle East, is charged with complicity to murder in an arrest warrant signed January 2 by Letcher District Judge Kevin R. Mullins. In an affidavit accompanying the warrant, KSP Detective Joel Abner says Smith “was actively fighting with the victim Michael Hogg” and that Smith held Hogg down on the ground “while James Huffman intentionally stabbed (Hogg) repeatedly, causing his death.” 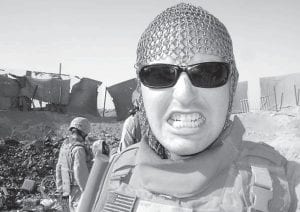 In photos captured from his Facebook social media site, Patrick Smith, the defendant charged with complicity to murder in the death of Michael Shane Hogg, is pictured above on duty as a Marine in the Middle East and at right after returning home to Pike County.

“This information was obtained after conducting an investigation and upon obtaining information from eyewitnesses and upon review of the evidence,” the affidavit signed by Abner says.

Smith, who has also lived in Lexington and professes to practice a Norse religion known as heathenism, was originally charged with two counts of carrying a concealed deadly weapon and tampering with physical evidence after Whitesburg City Police encountered Smith and Huffman in the parking lot of the Letcher County Recreation Center about two hours after the stabbing. 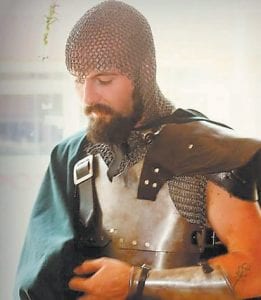 Smith is a Pike County native who attended high school in Fleming County. Interested in Norse mythology, his Facebook site says he made the armour he is wearing in the photo at right.

Smith originally told police that one of two knives found concealed in his boots was the weapon Huff- man used to stab Hogg to death and to wound two other men who had been celebrating the New Year with Hogg in a Whitesburg restaurant and bar, David Christopher Puckett, 23, of Jenkins, and Stacy Phillips, 23, of Thornton. Puckett, who suffered a stab wound in his back, was flown to Holston Valley Hospital in Kingsport, Tenn., where he was treated and released. Phillips was treated at the Whitesburg hospital for a hand wound.

A warrant naming Huffman, of 115 Bank Street, Pikeville, charges that he “had visible abrasions” and dried blood on his hands after he and Smith were taken into custody after the two walked up to Whitesburg Police Officer Justin Hunsucker and another city official around 4 a.m. and asked if they could use a cell phone to call someone to come and get them.

Hunsucker had been at the recreation center parking lot since being the first officer to answer a 9-1-1 call from 23-year-old Samantha Mullins of Wise, Va. Mullins had attempted to drive Hogg, Puckett and Phillips to the Whitesburg hospital, but was unable to make it there because all four tires on the Jeep Wrangler she was driving had previously been punctured. Apparently still fearing Huffman and Smith, Mullins tried to hide the Jeep in an alley beside the recreation center before she called 9-1-1 shortly after 2 a.m. 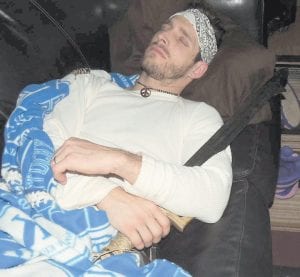 ACCUSED KILLER James Richard Huffman IV posted photos of himself on his Facebook social media site. Above, Huffman, who is charged with stabbing Michael Shane Hogg eight times with a knife, poses with a Nordic sword. Huffman, who is also pictured below, has a history of recent charges in Pike County. In early December, he allegedly engaged in an hour-long standoff with police after Pike Sheriff ’s deputies attempted to serve a warrant for his arrest on a drug possession charge. Huffman pleaded not guilty to charges of first-degree criminal trespassing, second-degree disorderly conduct, menacing and harassment as a result of the incident and is due in court on the charges Jan. 23.

Police also charged Smith with criminal mischief after determining he had cut the Jeep’s tires. Huffman is charged with murder, first-degree assault and second-degree assault. Both suspects pleaded innocent at arraignment in Letcher District Court last Thursday and are being held without bond in the Letcher County Jail. Both are scheduled to appear at a preliminary hearing, also in district court, at 3 p.m. January 9.

Sources knowledgeable with the investigation have told The Mountain Eagle that a couple believed to be the parents of either Huff- man or Smith were driving around Whitesburg looking for the two men shortly before they were arrested. The man and woman, who were stopped after being observed in van with Pike County license plates, told a police officer they were looking for their son and another man who called them and said they were lost in Whitesburg near an abandoned building near a parking lot. The officer who stopped the man and woman let them go after being notified that Huffman and Smith had approached Officer Hunsucker outside the recreation center. 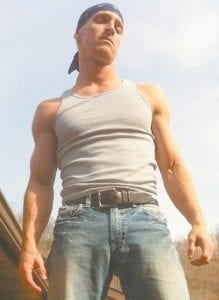 Sources close to the case also say police are working to determine whether Hogg, Puckett, Phillips and Mullins had left downtown Whitesburg to visit a friend’s nearby apartment before returning to Hayes Street to try to locate an item they believed had been stolen from the Jeep in which they were riding.

The three stabbing victims and Ms. Mullins were seen inside the StreetSide Grill and Bar on Main Street in Whitesburg during a New Year’s Eve celebration there. Huffman and Smith were also seen walking into StreetSide, but stayed inside only briefly before walking back outside onto Main Street. 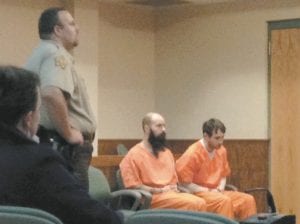 StreetSide Bar and Grill owner Charlie Wright said a review of surveillance video shows no altercation between the victims or the suspects occurring there. Wright said the business had already closed for the night before the crime occurred.

“He had just left about 20 minutes prior and noticed absolutely nothing out of the ordinary,” said Fields.

Kentucky State Police were conducting a roadblock on KY 15 at Dryfork at the time the 9-1-1 call was received and arrived at the recreation center parking lot soon after Hunsucker. 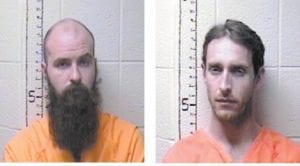 Murder suspects Patrick Smith, left, and James Richard Huffman IV are being held without bond in the Letcher County Jail. The two men are scheduled to appear at a preliminary hearing later this week.

Funeral services for Hogg were held Saturday at the First Baptist Church in Whitesburg before a standing room-only crowd.

“ That’s probably the biggest funeral we have had,” said Chris Campbell of Letcher Funeral Home in Whitesburg. Campbell said long lines of people also waited outside the church during visitation for Hogg on Friday night.

While at Letcher County Central High School, Hogg was a catcher and first baseman on the baseball team. He also started on the basketball team and stood at 6 feet 2 inches tall, said LCC baseball coach Brian Dean.

“He was probably one of the best athletes I have coached since I have been here,” said Dean. “Everybody loved him. He was always smiling.”

Dean said that in 2007, Hogg hit the only homerun recorded that season at Madison Central High School in Richmond, a field that is longer than at most high schools.

“He was an excellent student, too,” said Dean. “I don’t think he ever met a stranger. He loved everybody.”

Dean said he thinks Hogg was so well liked because he didn’t worry about being popular and treated everyone the same. Dean said he stood in line for about 45 minutes Friday night before he was able to gain admittance to the visitation.

“He was a good student and a good role model for our younger kids,” added Letcher County Central Athletic Director Arthur “Ozz” Jackson. “You could depend on him. He always watched out for his buddies.”

Hogg was preceded in death by his grandparents Atlas Frazier and Willis (Chub) and Lida Hogg.

He is buried in the Hogg Cemetery at Kingscreek.