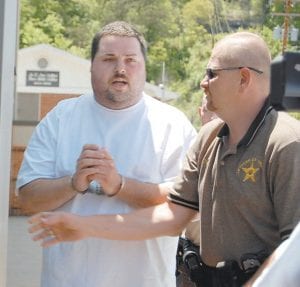 Letcher County Sheriff Danny Webb announced Tuesday afternoon that police have broken up an interstate OxyContin trafficking operation responsible for the illegal sale of “tens of thousands” of tablets of the highlyaddictive painkiller in Letcher and surrounding counties. Pictured above is one of five suspects arrested here Tuesday, 33-year-old Joseph A. “Gotti” Tucker of Warren, Michigan. Tucker is being escorted into the Letcher County Courthouse by Deputy Sheriff Scott Taylor. SEE STORY ON PAGE 13.