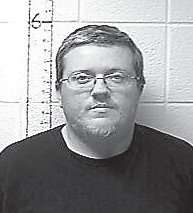 Jeremy Christopher Colley, 32, was being held in the Letcher County Jail pending his arraignment this week. Bond was set at $10,000 cash.

Police have charged a Whitesburg man with exposing himself on three separate occasions in Jenkins during the last year.

Jeremy Christopher Colley, 32, of 73 Eagle Creek Road, is accused of flashing himself to a Girl Scout troop, a woman and a group of cheerleaders in Jenkins.

Jenkins Police Chief Thomas Bormes said a Girl Scout troop was selling cookies outside the Dollar Store in Jenkins when Colley drove by in his vehicle, stopped long enough to raise up in the seat to expose himself and then drove away. Bormes said Colley did the same thing to a woman who was walking across from Jenkins High School, and also in front of cheerleaders who were at Lakeside.

Colley was arrested April 12 and charged with first-degree indecent exposure. He remains in the Letcher County Jail, where bond is set at $10,000 cash. He was scheduled to be arraigned May 16 in Letcher District Court.

Colley pleaded guilty to that charge on Aug. 21, 2007 and received two years probation. He paid a $500 fine and court costs.