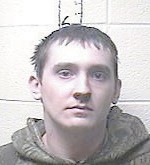 Police say a 20-year-old Roxana man was burning copper near his residence when police arrived to serve outstanding warrants.

“There’s been a rash of thefts and burglaries in the Roxana community during the past several months,” said Lt. Brian Damron of the Letcher County Sheriff ’s Department. “The sheriff ’s department has been working diligently to investigate the thefts in Roxana. With the help of citizens in Roxana, we were able to make an arrest.”

Since Slone’s arrest, no additional thefts in Roxana have been reported, said Damron.

In January, Slone was indicted on charges of stealing computers, jewelry and other items belonging to Kevin Day, general manager of WTCW-AM and WXKQFM, and his family.