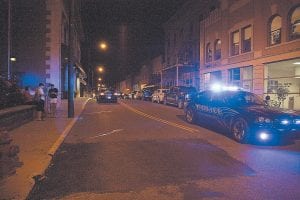 City police converged on downtown Whitesburg Friday night after someone phoned in a bomb threat to a Main Street business from a payphone at a Neon convenience store. (Photo by Thomas Biggs)

A Friday evening telephone call saying that a bomb had been placed in the Streetside Grill and Bar in Whitesburg postponed well-attended musical performances at Streetside and the Summit City Lounge.

Summit City, located across the street from Streetside, was emptied as Whitesburg police officers searched the lounge. Whitesburg Police Chief Tyrone Fields said Streetside owner Charlie Wright decided against having his establishment cleared after determining the threat was a hoax.

The Sons of Bill, a national touring band from Northern Virginia which has released several successful albums, was just doing its sound check at Summit City when Whitesburg Police Officers Alicia Congleton and Justin Hunsucker entered. It quickly became apparent this was not one the regular walkthroughs conducted by officers, but a more serious situation when Summit City owner Amelia Kirby asked patrons to exit out the rear and stay outside until the all clear was given. The crowd stayed out for 20 to 30 minutes before being allowed to reenter. Band members took the delay with good humor and lead singer James Wilson, one of three “Sons of Bill” Wilson, a professor emeritus of philosophical theology and southern literature at the University of Virginia, told the crowd that this was the band’s first bomb threat.

At the same time, Chief Fields conducted a search of Streetside. Fields said Wright told him he did not believe there was a bomb and he feels he has been targeted by someone who wants to damage his business. Fields said that a number of other calls have been made to city officials and police officers to lodge various complaints against Streetside, but none have proven to be valid.

Fields said that Whitesburg officers have checked out every complaint lodged against Streetside, and none have been substantiated. He added that Wright told him he believes jealousy or other personal reasons have played a big part in the complaints made about his establishment. Wise County, Va., band Folk Soul Revival, a popular regional band that has performed locally on a number of occasions, was playing a wellattended show at Streetside.

“They had just started playing,” said Fields. “We won’t tolerate this kind of thing. I am investigating it and when we find who made the call, that person will be charged with first-degree terroristic threatening. We take this as a serious matter and I expect to make an arrest.”

Fields said that he and Officer Congleton are investigating the incident and that the call originated from a pay phone outside the Double Kwik convenience located at Neon Junction. Fields said he hopes the caller’s identity will be revealed when surveillance tapes are examined. He added that the caller did not say he had placed the bomb himself, saying instead he had overheard two men talking, and one of them said he had placed a bomb in the Streetside building.

Summit City owner Kirby said the disruption caused by the caller was frustrating and is not conducive to furthering the city’s shared vision of becoming a performance and arts and dining center. Whitesburg was recently called the “hippest mountain town in Kentucky” by Blue Ridge Outdoors Magazine. Kirby said she appreciates the police presence in the downtown area and the cooperation of city officials, but that the disruptions are bad for everyone.

Police Chief Fields agreed, saying that this kind of thing is bad for business and bad for the city and repeated that it will be dealt with. He said he doesn’t want anything like this to take place to interfere with normal activity and said it had created problems for both businesses.

“They are here to make money,” said Fields. “These things have a potential to hurt local businesses.”

Fields added that he would appreciate any information concerning who made the phone call and asked that anyone with anything that could help the Whitesburg Police Department solve the case to call 633-2737.