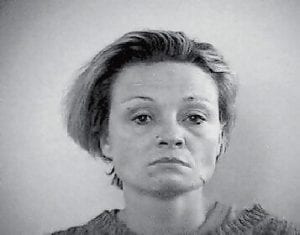 SHARON K. COLLINS, formerly of Sandlick, is being held in the Fayette County Jail on a $500,000 bond.

Authorities are proceeding with charges against a former Sandlick woman who is charged with murdering a Mayking man early last week by stabbing him in the abdomen.

The case against 30-year-old Sharon K. Collins was referred to a Fayette County grand jury after police testified during a preliminary hearing Monday (September 24) that Collins admitted that she stabbed David Brian Hogg, of Bottom Fork, with a pocket knife on September 16.

Detective William Brislin said Collins first told police she found Hogg, 36, lying dead next to his car in Lexington. She arrived at Samaritan Hospital with Hogg at 6:27 a.m. on the day he died.

Brislin said Collins later changed her story and said she stabbed Hogg with the pocket knife after the couple had been arguing while Hogg was driving around Lexington searching for drugs.

Brislin said another man was in the vehicle with Hogg and Collins when the stabbing occurred, but that he has not been located.

Collins, who attended Whitesburg High School, was being held in the Fayette County Jail this week on a $500,000 bond.

Funeral services for Hogg were held September 20 at Everidge Funeral Home. Burial was in the Craft Cemetery at Mayking.

Hogg enjoyed fishing, hunting, camping, four-wheeling, and collecting Native American memorabilia. He was a former member of the Indiana Carpenters Union and was a member of the 1989 graduating class of Whitesburg High School.