Police: Shooting of two is a result of drug buy that went bad near Isom 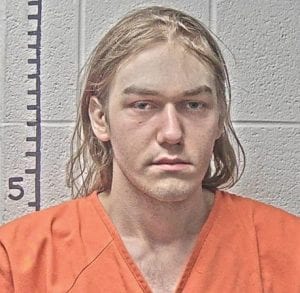 A Rockhouse man is in jail after allegedly shooting two men in a marijuana deal gone bad.

Bobby Combs, 20, of Daniels Branch, was arrested about four hours after the shooting, which occurred on Racetrack at Isom. According to police reports, Zane Day called Kentucky State Police in Hazard about 7:06 p.m. Monday, saying that Combs had shot him and Chester Ross, and that Ross was driving them to the hospital.

When police interviewed Day and Ross at the hospital, they told officers that they were going to meet Combs to buy marijuana. Detective Brandon Thomas wrote in the citation charging Combs that Day got out of the car and walked back to Combs’s bicycle. The citation says that Combs brandished a shotgun and demanded “the $50” from Day, and Day then pulled a gun “in self defense” and ran back to the car. The citation says Combs started firing the shotgun, striking both Day and Ross.

Police arrested Combs at 10:48 p.m. on Tipple Road at Isom and charged him with first-degree assault and first-degree robbery. No charges have been filed against Ross and Day, however M. Trooper Jody Sims, spokesman for the Hazard Kentucky State Police Post, said the incident is still under investigation and findings will be presented to a grand jury.

“What we do know is these three got together on some kind of illegal drug transaction, and it led to this,” Sims said.

Trooper Jason Bates charged Combs with additional charges after he arrived at the Letcher County Jail. Bates said in a citation that while he was gathering information, Combs told him he had Suboxone, a drug used to treat opioid addiction and withdrawal, in his pocket and didn’t want to take the drug into the jail. Bates said he searched Combs and found a small amount of “a green leaf-like substance” in a small plastic bag, nine capsules and half of a tablet believed to be Neurontin in a separate plastic bag, and four orange pills, two half pills and one quarter of a pill all believed to be Suboxone, in a silver metal container. Bates wrote that he also found a glass pipe that appeared to have marijuana residue inside.

Sims said there is potential for additional charges after the matter is heard by the grand jury.