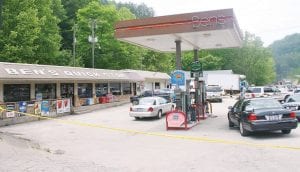 Police vehicles surrounded Ben’s Quick Stop near Hazard on May 30 after a man shot and killed a Perry County magistrate and a county employee, then turned the gun on himself. The man shot Magistrate Jimmy Darrell Neace and county road department employee Lewallen Caudill. (AP Photo/ Lexington Herald-Leader, Cassondra Kirby)

Authorities are still looking into why a man shot and killed an elected official and a county employee at rural convenience store, and then turned the gun on himself.

“Nobody can tell us that he was mad at anybody,” State Trooper Tony Watts told the Lexington Herald-Leader. “We also haven’t found anybody that says he was laid off or fired.”

Perry County Judge-Executive Denny Ray Noble said the families of all three men are looking for a reason, but he doesn’t think they’ll find one.

“He just flipped out, and that’s it. He had to lose his mind to do that because he wasn’t that type of fellow,” Noble said.

Noble described Fugate as a hard worker who always smiling.

“There was no indication this boy would do this,” Noble said. “This is like a dream – a nightmare.”

People who knew the men say they were friends. Witnesses to the shooting told investigators they didn’t hear any arguing before the shots were fired.

Much of the regular crowd had returned Monday to Ben’s Quick Stop in the community of Chavies.

Linda Combs, 34, said she can’t sleep since she witnessed the shootings when she and her husband stopped for gas.

“It plays over and over like a horror movie,” she said.

Combs said she remembers Neace’s hands flying up when he saw the gun and how Fugate looked at her husband right before he shot himself.

The men were pronounced dead at the scene. Neace and Fugate were buried Monday. Funeral services were held Tuesday for Caudill.

All the men had worked for the county for years and ate together often.

“They were all really good people,” Combs said. “You talk to anyone, and they’ll tell you that. We just can’t understand this.”