Building on what’s already here is best bet for tourism 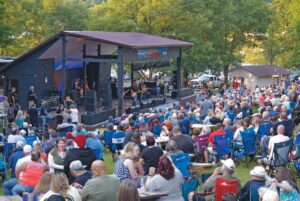 A large crowd of people showed up at Mountain Heritage Village in downtown Whitesburg on July 22 for a free performance by the country music band Kentucky Headhunters. Local volunteers and officials believe that live music is one of a number of ways to build local tourism by “polishing” up what the area already has to offer. (Photo by Sam Adams)

For years, people have been saying the towns in Letcher County could be “just like Gatlinburg and Pigeon Forge.”

Letcher County has finally hitched its wagon to the tourism star, but it looks as though it may be more like some other, more sedate mountain towns, and a little less like the glitz and bustle of Sevier County, Tennessee.

Sevierville, Pigeon Forge, and Gatlinburg are shoals in a rolling river of people. Drivers can spend hours hung up in traffic, and even pedestrians get into traffic jams on the sidewalks. But a study by the University of North Carolina Chapel Hill shows some other mountain towns have found a found a way to develop and prosper through tourism based not on kitsch, but on the natural bounty around them. One of the case studies presented by UNC is less than hour away, in Big Stone Gap, Virginia.

A recent weekend trip across the state line revealed a main thoroughfare blocked off to traffic, street vendors under tents, and locally owned downtown restaurants filled to capacity. There were museums downtown and art, and live music was scheduled to begin later in the evening.

In short, “there” looks a lot like “here.” And according to the UNC study, that’s a good thing. The university picked 150 cities from coast to coast with reputations for locally-driven economic success. Researchers pared that number down to 35, and then did case studies of 12. Big Stone Gap and the towns of Hayesville and Bakersville, N.C., were among them.

“Given each community’s success with small-scale revitalization projects and tourism, the question becomes how and why these small mountain communities have been able to achieve such impressive outcomes,” the report says. “First of all, each community lies in a scenic and desirable setting within easy reach of larger metropolitan populations. Second, there is a deep sense of shared heritage and culture in small mountain communities that contributes to communal behavior. Also, both Bakersville and Hayesville have moved beyond the initial spark provided by Hand-made in America and have assumed ownership of their communities’ futures.”

Letcher County has taken a similar approach, and like Big Stone Gap, Bakersville and Hayesville, the efforts are beginning to pay off. Overlooks on Pine Mountain are in constant use. Locally owned restaurants have cropped up in downtown and now national chains are investing in new locations of their own. Fourteen Foods, a Minnesota company, just replaced its 40-year-old Dairy Queen with a new, high-end restaurant, and KFC returned to the city after a 30-year absence. While some brush off “the fast-food economy,” it shows that successful companies are investing here, and they’re not investing pennies. In April, the Taco Bell on Hazard Road sold to Ampler Development LLC, a Texas franchisee, for $2.15 million.

“I don’t know what kind of psychological thing happens in people’s brains when they see all of these,” Whitesburg Mayor Tiffany Craft said, adding that the restaurants make it look the economy is doing well, and that there are things happening here. “I’d like to see a few more, but I’d like to see a few more (local) people who have dreamed of opening a restaurant to be able to do so.”

“I’d like to add to that,” she said, pointing to Pikeville’s Dinner in White, during which people are invited to put on their best white outfit and come downtown for dinner.

“I don’t want to copy that, but I want to figure out something of our own,” she said. “People love to dress up in costume.”

Craft, who took office just two weeks ago after the city council appointed her to the position left vacant when her husband, Mayor James Wiley Craft, died, said she wants to have more events at Whitesburg River Park, possibly including big-name concerts, such as the Ace Frehley concert that was held at River Park in 2019.

Promoter Greg Napier of Hazard planned that concert, and his “An Evening With” concert series has become a staple for up-and-coming bands, and stars who no longer play stadium shows.

The list of concerts he has brought to Whitesburg in the past includes Don Dokken, Glen Hughes of Deep Purple, Jason Isbell, Cracker, Colin Hay (former Men at Work frontman), Carlene Carter, and Brian Owens and the Deacons of Soul. In all, Napier said bands he has booked to play in Whitesburg appeared afterward on the Late Show with David Letterman 52 times before Letterman retired.

“I’m going to get back with him,” Craft said. “There’s been some big names mentioned, we just haven’t had the money.”

Meanwhile, while the city of Whitesburg is focusing on special events and smoothing the way for businesses, the Letcher County Convention and Tourism Commission is picking “low hanging fruit,” and “polishing the apple,” Chairwoman Missy Matthews said. That means building on attractions that are already here and expanding them.

“My goal is to make people want to pack a bag and come here for multiple days,” she said.

An example of that strategy is Main Street Live, a Saturday night concert series at Appalshop’s solar pavilion. The hope is that people in town for the Levitt AMP concerts series on Thursday nights will stay in a local bed and breakfast or motel and go to both concerts.

The Bolling North Fork Pavilion is an example of polishing the apple. The old Salyer’s Radio building’s roof and floors had collapsed, but the tourism commission partnered with the city and Mary Bolling, who bought the building from the city, to turn the shell into an outdoor dining area for people in downtown. Also, overlooks on Pine Mountain capitalize on the view from the mountaintop.

“We’ve not had to deal with grants up until now. Everything we’ve done as been through donations or volunteer work,” Matthews said. “Up until now the project has been entirely community based.”

That is much the same as the approach taken by Big Stone Gap, and highlighted by the UNC study.

“Big Stone Gap was riddled with high unemployment and a declining economy. For decades, the town had relied on outsiders, such as the coal company or textile plant, to provide jobs. When these industries pulled out of town, Big Stone Gap looked at itself and what it had to offer, and it decided to build a new economic underpinning based on its local assets and opportunities,” the study says.

“Over a period of six years, entrepreneurs harvested these opportunities, and slowly but surely, new small businesses started appearing in town — new businesses with local ownership and local roots. In terms of its long-term prospects, Big Stone Gap is well underway in transforming its economy to one driven by local assets and leaders, one much less vulnerable to major economic shocks from circumstances outside of its control.”

Jenkins is in the process of doing that kind of evaluation now. Mayor Todd Depriest said the city is trying to determine the ownership of the old Mount Sterling to Pound Gap Road, also known as the Pete Castle Highway.

“They call it the wagon road,” Depriest said “It was the road they used to bring in supplies when they were building Jenkins.”

Originally a series of Indian trails, the road was first surveyed in 1817, and was one of the first state roads in Kentucky, with the General Assembly appropriating $2,400 in 1824 and $23,000 in 1837 to work on it. It was the main road settlers used to drive hogs and cattle to market in Virginia, and parts of it are still visible along the side of Pine Mountain below U.S. 23. Depriest and others want to turn that old road into a hiking and biking trail, a route for which they have a preliminary design done by a Missouri consultant.

“TECO would give us enough of an easement to get to the top of the mountain,” Depriest said, referring to TECO Coal, which pulled out of Jenkins several years ago. “When Cambrian Coal bought all that, Cambrian sent us a letter that it didn’t fit in their business plan.”

Now the city is stuck trying to determine if the state of Kentucky might already hold a right-of-way for the old road.

Depriest said the city is still working on that issue and on other trails, and would like to see the Pine Mountain Trail opened all the way to Cumberland Gap.

All of the cities in the county are working on more basic needs, such as water and electricity and increasingly, on broadband Internet service, and other infrastructure such as garbage collection and litter cleanup. The UNC report said that sort of community development is economic development. Depriest agreed.

“It’s not like company coming and you clean the whole house, you have to keep it clean.”