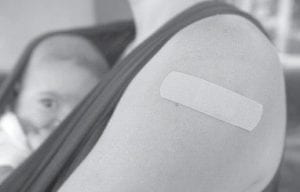 Only about a third of adults who have tried to get a swine flu vaccine have been able to get it, according to a recent national poll.

That’s true even for people who are at extra risk for severe complications and should be at the front of the line. The numbers are about the same for parents who tried to get the vaccine for their children, the Harvard School of Public Health poll found.

Swine flu vaccine has been available in the United States for about a month, but supplies have been limited because of manufacturing delays. However, availability is picking up, said Dr. Anne Schuchat of the Centers for Disease Control and Prevention. About 38 million doses of swine flu were available Nov. 6, a one-week increase of about 11 million doses. Another 8 million doses were expected this week, she added.

Overall, the poll found about 80 percent of the adults in priority groups said they haven’t tried to get it yet and 60 percent of parents haven’t sought it out for their kids.

The Harvard telephone poll surveyed about 1,000 adults. The margin of error was plus or minus 3.8 percentage points.

Many of the poll’s findings seemed consistent with what the government has been hearing and seeing, said CDC officials. Nearly a third of Americans who tried and failed to get vaccine said they were very frustrated, the poll found, and that frustration has been evident at long lines at vaccination clinics.

But it was encouraging to see that nine in 10 people who couldn’t get vaccine will try again, said Schuchat, who heads the CDC’s National Center for Immunization and Respiratory Diseases.

— About 5 percent of those surveyed said they’d been vaccinated.

— About 60 percent said there were swine flu vaccine shortages in their community.

— About half who tried couldn’t find information about where to get the vaccine.

Because of limited supplies, there have been situations in which vaccine went to doctor’s offices or clinics intended for children or other priority groups and it wasn’t publicized, Schuchat said.

“When you have limited supply, advertising is difficult. You don’t want to frustrate the demand,” Schuchat said at a Nov. 6 press conference in Atlanta.