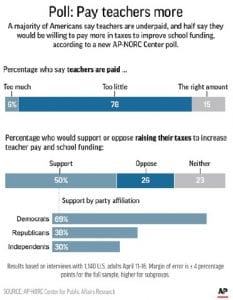 The findings of the new poll from The Associated Press-NORC Center for Public Affairs Research come amid recent teacher strikes and other protests over low pay, tough classroom conditions and the amount of money allocated to public schools in several Republican-led states.

Tens of thousands of Arizona teachers voted last week to strike after rejecting an offer of a 20-percent raise, because it didn’t include a vow from state lawmakers not to further cut taxes before providing more money for the state’s schools.

“ To educate children and barely get a living is obnoxious,” said Elaine Penman, a company manager in Tucson, Arizona, who added she and others went outside to cheer on protesting teachers who were marching by.

She’s among the 50 percent of Americas who say they’d pay a higher tax bill if it meant more money for teachers.

“ I’m a parent and I benefit directly from what teachers do,” said Penman, who has two children in traditional public schools and one in a charter school.

In 2016-2017, the average salary for a public school teacher was $58,950, down slightly from the previous year, according to the National Center for Education Statistics. Kentucky teachers earn an average of about $52,100.

Americans in states with the lowest average teacher salaries — less than $50,000 a year — were slightly more likely to think teachers were paid too little.

The AP-NORC poll found that parents and those without children are about equally likely to think teachers are paid too little. It’s a sentiment that crosses party lines, too. Nearly 9 in 10 Democrats, 78 percent of independents and 66 percent of Republicans think teacher salaries are too low.

Half of Americans would be willing to shoulder the cost of paying teachers more and providing more money to schools via higher taxes, with only 26 percent opposed. But while 69 percent of Democrats say yes to higher taxes for schools, only 38 percent of Republicans and 30 percent of independents say the same.

People living in urban areas are more likely than those in rural areas to support such a tax increase, 57 percent to 40 percent.