Polly is inducted into Hall of Fame 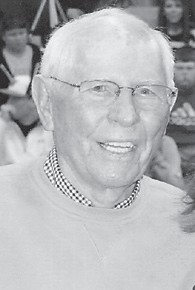 Whitesburg native Paul W. Polly was recently inducted into the Paris (Ky.) Greyhound Hall of Fame, which honors those who have contributed to the academic and athletic tradition of Paris High School. In addition, Polly was recognized for his positive influence and impact on others.

Polly is a graduate of Whitesburg High School where he excelled in football, basketball and baseball. He was drafted into the U.S. Army and served two years, 18 months of which he spent in Germany with the Aviation Engineer Battalion.

From 1964 to 1977, Polly was superintendent of the Paris City School System. Under his leadership, Seventh Street Elementary School and Southside Middle School were accredited by the Southern Association of Colleges and Schools and Paris High School received a comprehensive rating, the highest academic rating a high school can obtain, from the Kentucky Board of Education.

Improvements to facilities during Polly’s term as superintendent included the building of a new elementary school, a new fine arts center, an addition to Southside Middle School, and the remodeling of the school’s gymnasium lobby and a residential property for administrative offices, an addition to the field house at the athletic field, new bleachers and a gravel walkway at the athletic field, a quarter-mile track, and renovation of the playing field.

In retirement, he enjoys fishing and attending University of Kentucky football games, traveling and spending time with his wife, Diane, and their family.