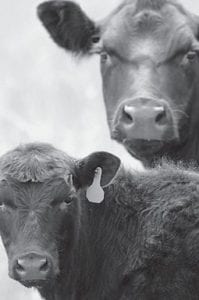 In this Great Plains ranching town, cowboys still lasso steers as part of their daily routine and cattle producers like Bob Sears still take pride in the long tradition of raising American beef.

But Sears and many other ranchers say the market for domestic meat has withered to the point where they often receive only a single reasonable bid for their animals — a trend that could eventually mean lesser-quality meat on dinner tables across the United States.

The struggle to get a competitive price, they say, is helping to push thousands of producers out of business and might put pressure on others to sell sicker, weaker cows with less tender, less flavorful meat and smaller rib-eyes, for example.

“When the marketplace is not profitable, the only recourse a producer has is to cut the cost and try to produce more pounds with less money,” said Bill Bullard, chief executive officer at R-CALF USA, a Montanabased trade group that represents cattle producers.

The cash market for domestic beef has been declining slowly for years. But The Associated Press interviewed cattle producers in the nation’s big ranching states who reported having no choice but to sell the vast majority of their cattle to one buyer.

Producers almost never criticize the industry’s leading meatpackers because the companies are valued customers. An AP analysis of shipping logs and sales receipts confirmed their accounts.

“There’s actually no market. You either give them to these guys, or you have no market,” said Sears, who ran one of Nebraska’s biggest feedlots until declaring bankruptcy in March.

The complaints have also drawn the interest of federal regulators, who are investigating possible antitrust violations in the meatpacking industry.

Sears and other cattle producers suspect meatpackers are quietly cooperating to keep prices low in an area that stretches from Kansas to Nebraska and South Dakota, the region that dominates U.S. cattle production.

Industry representatives insist there is no collusion and that the dwindling number of bids reflect broader changes in the way beef is bought and sold throughout the nation.

Without a competitive market, experts say, cattle producers could lose the motivation to raise high-quality meat. Some of them might cut corners on medicine, feed and veterinary care.

“Food animal husbandry requires substantial expenditures,” said Peter Carstensen, a law professor at the University of Wisconsin and former Department of Justice antitrust attorney. “If you’re not going to be compensated for that, your incentive as a farmer to produce the quality just isn’t there.”

Cattle production is divided into two stages: Ranchers first raise the cattle from birth until maturity, then hand them over to feedlot owners, who “finish” the animals by fattening them up before selling them to meatpackers.

Since 1996, plunging profits have caused about 11,000 ranches to shut down annually, according to one industry group. That has coincided with a 27 percent drop in the number of U.S. feedlots in just 13 years.

The American beef industry has long been dominated by just a handful of major companies. But as recently as a few years ago, producers could expect to sell their animals to a mix of meatpackers. Now the kind of competitive bidding for livestock that once defined the industry has all but ended in many places.

The process often works like this: Several competitors visit a feedlot to place bids for the same cattle. One or two companies might not submit bids at all. Others offer bids that are several dollars per head less than the market price. The fourth meatpacker bids somewhat higher, ensuring that the rancher has little choice in deciding whose bid to accept.

The competitive cash market for cattle has been gradually shrinking since the 1990s, but the pace of decline has quickened in the last few years. In 1999, the cash market accounted for nearly 70 percent of cattle sales to the top meatpackers.

By 2007, it had fallen to just above 50 percent, according to Department of Agriculture figures. The low cash bids also mean meatpackers can reduce prices paid to ranchers who sell meat by contract, a separate sales system.

Those trends are reflected in the sales of several ranchers who opened their business records to the AP.

Missouri rancher B.J. Neill, for instance, said one company tended to dominate buying at each feedlot where he placed his cattle, even if that company off ered low-ball prices.

Shelby Jones, a feedlot manager in Dighton, Kan., had an almost identical experience. Sales figures showed that National Beef Packing Co. LLC bought more than 75 percent of his cattle, despite at least three companies submitting bids. Some of those cattle were sold to National under contract, but even on the open cash market National won 58 percent of the bids.

“You get into the cash market, and it’s pretty disproportionate,” Jones said.

Such examples have prompted the Agriculture and Justice departments to assign antitrust regulators to investigate the way meatpackers buy cattle.

Neill said two USDA attorneys flew this summer from Colorado to meet with him at a hotel in Clinton, Mo., to take his testimony in a deposition.

Neill said he discussed the way meatpackers appear to divvy up feedlots when they bid for cattle and other tactics that appear aimed at keeping prices low, such as buying cattle late at night, when markets are closed and feedlot owners have to guess what the going price of beef might be.

To restore competitiveness, the Obama administration is proposing the most sweeping antitrust rules for meatpackers since the Great Depression.

The AP’s reporting found no evidence that meatpackers had engaged in the kind of flagrant backroom deals that are illegal under antitrust law.

But the companies could be engaged in a sort of gentlemen’s understanding, simply taking cues from one another and staying out of certain competitive markets, Carstensen said.

“I doubt very much that I could convince a court that that’s illegal,” Carstensen said, even if the practice undermines the market.

American beef production has remained almost stagnant between 1985 and 2009, growing just 6.4 percent, while the amount of beef from imported cattle has nearly tripled in that time, according to an analysis of USDA figures conducted by R-CALF USA, the trade group that represents cattle producers.

e trend will speed up

if meatpackers are able to depress prices on the cash market, Bullard said.

“As the packers consolidate, they are able to maximize their market power to leverage down prices. It’s become uneconomical for domestic producers to stay in business,” Bullard said.

In 2004, Sears sold most of his cattle to four big meatpackers: Cargill, Nebraska Beef in Omaha, Tyson Foods and JBS SA, the world’s biggest meat company.

But by 2009, that kind of competition was gone. Sears’ shipping records showed that Swift bought 77 percent of Sears’ cattle that year. After his operation became known as a “Swift yard,” Sears said, other companies simply stopped competing for his cattle.

A spokesman for the industry insisted meatpackers are not engaged in any conspiracy to stifle the cash market or keep prices low.

Mark Dopp, senior vice president of regulatory affairs for the American Meat Institute, said similar allegations have been made for decades, but federal investigations and private lawsuits have never revealed any collusion.

Dopp acknowledged that the competitive cash market is being replaced with contracting arrangements that let meatpackers buy cattle without bidding on an open market. But there is still competition between meatpackers, he said, because feedlots are free to sell to anyone.

Some feedlot owners say working with a single meatpacker can streamline sales and take risk out of a market that depends on thin profit margins.

Jerry Adams sells a majority of his cattle to Tyson from his large feedlot about 100 miles south of Ainsworth.

Adams says the arrangement works to his benefit. Tyson is looking for certain qualities in its cattle, such as the leanness of their meat, and Adams knows how to deliver.

“Do I think it would be better if there were more meatpackers? Yes. But that’s not really a choice,” Adams said.

Dopp said a cattle producer who gets only one bid for his animals might have an underlying problem with his business.

“I don’t think they have to talk to each other or have any agreement. Why would they?” Sears said. It doesn’t “take 10 minutes for one buyer to know what the other buyer is doing when there are only three of them.”