Popular display in Whitesburg took time and lots of patience 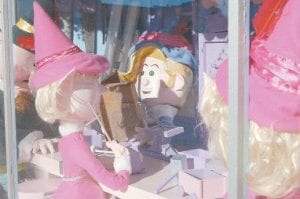 All of the characters in the display were handmade locally.

Dr. David Narramore paid great attention to detail when he created a Christmas display in front of his dentist office in downtown Whitesburg.

Narramore and his family spent countless hours since the beginning of October preparing for an elaborate creation, taken from “Rudolph the Red-Nosed Reindeer,” depicting seven elves in a workshop making toys for Santa Claus.

“It pretty much looks like the movie,” said Narramore.

Narramore said the display is a combination of two scenes in the movie — one where Hermey the elf wants to be a dentist and the other scene where the elves make toys.

Not only do the characters look like they just walked off of a Hollywood set, the toyshop is complete with particular toys and tiny paintings in the background.

“What you are seeing is a recreation of the set they filmed it on,” said Narramore. “We looked at all the colors and position of the set.”

Narramore said Hermey the elf is reading a book about dentistry as the foreman elf stands behind him shaking his finger at him as if to say “Elves make toys!” Both Hermey and the foreman elf are wired with motors which help them move. 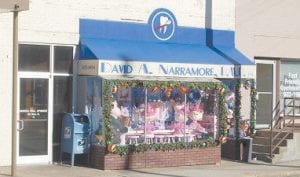 The display was located in front of Narramore Dentistry.

At night, Narramore placed Rudolph on the sidewalk, with the reindeer’s nose lighting up and then fading.

Narramore said if the display wasn’t made to great detail, it wouldn’t have produced such a strong effect.

All of the characters were made at Narramore’s home — by hand and with “lots of wadded up paper and paint.”

Narramore said the elf-making process took many hours because he was recreating pop icons which had to look exactly like the originals so that people could recognize them and know who and what they were supposed to be.

“It had to be dead on,” said Narramore. “… It’s a long way from getting the plaster on to the final coat of paint.”

Dr. David Narramore’s wife, Lisa, made all of the elf costumes.

“Each one has to be custom fitted to that figure,” he said.

Dave Niece built the table for the display and helped construct the Plexiglass window box for the exhibit. Patsy Morrell and Phyllis Barker helped make the Santa Claus character.

“It’s just a testament to the people in the community and what people in eastern Kentucky can do artistically,” said Narramore.

Narramore said when he was younger he remembers looking at the Santa and reindeer display in front of the Royal Crown Cola bottling company at Ermine.

“We wanted to give kids something to look at,” said Narramore. “We want it to be a new tradition at Christmas.”

Narramore said children of all ages appreciate the display.

“We always try to decorate the window but have never really done anything on a big scale,” said Narramore. “We just wanted to do something that when you look at it, it would make you smile.”