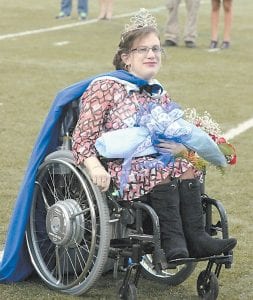 “Everybody who has ever come in contact with Casey knows that she has a beautiful smile,” said Mr. Begley. “She was always happy and had a smile. She wouldn’t let you see her down. She didn’t let anything stop her.”

Casey had been in and out of hospitals recently, spending nearly two weeks in Lexington during two hospital stays before being admitted to Whitesburg Appalachian Regional Hospital on October 20. After being discharged last Thursday, Casey built a scarecrow with her nephew and spent time with her grandparents and parents at Camp Branch. Therman Begley will forever cherish the two hours he and his wife spent alone with their daughter Thursday evening.

Although her ear was aching Friday morning, Casey, who was confi ned to a wheelchair, could hardly wait to return to Letcher County Central High School. 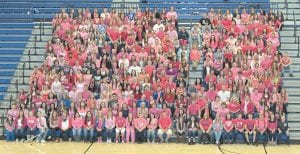 Much of the student body at Letcher County Central High School wore pink Monday as a show of support to their late classmate Casey Begley who died Friday.

“When the wheels hit the school ground, she would cock that head back, smile and away she would go,” said Mr. Begley. “She always sucked it up and was tough.”

Letcher Central Assistant Principal Robert Hammonds said he heard a student tell Casey on Friday that she had been missed. Casey replied that she had missed school. Before the school day ended, Casey got sick and had to be flown by helicopter to Holston Valley Medical Center in Kingsport, Tennessee for treatment.

Mr. Begley said his daughter went to sleep at 9 p.m. on Friday, which was her regular bedtime.

“She was tired,” he said. “It was time for her to go and the Lord called her up.”

Spina bifida is a congenital disorder caused by the incomplete development of the spinal column. On average, eight babies born each day in the United States have spina bifida or a similar birth defect of the spine and brain, according to the Spina Bifida Association’s website. 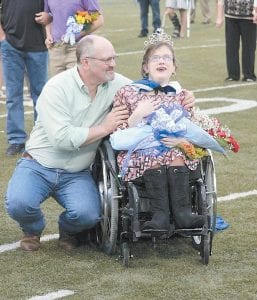 Therman Begley shared in the joy his daughter Casey was experiencing last month when she was crowned homecoming queen at Letcher County Central High School. He said it was the greatest day of her life. Casey died last week of complications of the birth defect spina bifida. (Photo courtesy Tonya Aslinger)

“We knew Casey was a special baby 18 years ago,” said Mr. Begley. “We got to share her with everybody else.”

Although Mr. Begley said he and his wife were overprotective of Casey when she was an infant, they encouraged her to participate in activities that interested her.

“She was a T-ball gal,” he said. “She was a Yellowjacket Rumbler. She did ballet. She deer hunted and fished.”

Mr. Begley said the greatest day of Casey’s life was when she was crowned Letcher County Central High School’s homecoming queen on September 12. She was so well liked that other queen candidates campaigned for her to win.

As the homecoming festivities unfolded on the football field that Friday night, Mr. Begley said Casey told him that she wouldn’t be disappointed if she didn’t win because she was just happy to be a part of homecoming.

When Casey’s name was called over the loudspeaker, she was so excited that “she hit the wheels, spun off and left Dad,” Mr. Begley said.

“It was a standing ovation and tears everywhere after that,” he said. “It was a glorious night.”

“ She loved being at school,” said Wright. “She was the only person I knew who could smile on a Monday morning.”

Wright said Casey never let her disability get in the way of having the brightest smile on campus.

“A few weeks ago, after Casey got out of the hospital the first time, she and her mom came in to get her work,” said Wright. “Even though I know she was feeling bad, she still had a smile on her face and was excited to come back to school. She was the kind of person that everyone loved to love, knowing her or not.”

The majority of LCCHS students and staff wore pink to school Monday in memory of Casey.

“I don’t think there is any doubt that she impacted everybody in our school,” said Hammonds.

To enable students to say their last good-bye to Casey at her visitation on Monday night, LCC operated a shuttle bus for more than five hours between Ermine and Camp Branch Pentecostal Holiness Church during visitation.

“It was unreal last night the number of people who knew Casey and came by to see her,” said Mr. Begley. “They filled up one of the guestbooks in the first hour.”

Casey had been looking forward to casting her first vote next week’s general election. Mr. Begley received her voter registration confirmation in the mail on October 22 and took it to her while she was in the hospital.

“Above anything else in this world, when she turned 18 Casey wanted to vote,” said Mr. Begley, adding that if people want to honor his daughter they can do so by voting next Tuesday.

“ Tell everybody to go vote and make it the biggest turnout in Kentucky,” he said. “It doesn’t matter who they vote for, they are voting for Casey.”

Funeral services for Casey were to be held at 1 p.m. today ( Wednesday) at the Camp Branch Pentecostal Holiness Church. Burial will follow in the Begley family cemetery at Mill Branch.