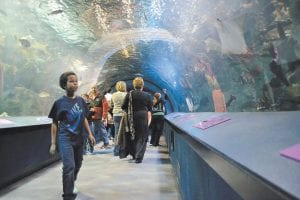 Nine-year-old Anaiah Jalloh of Columbus, Ohio, looked through a glass tunnel at sharks and other sea creatures during a recent visit to the Newport Aquarium in Newport, Ky. The aquarium, across the river from Cincinnati, remains a top tourist attraction as it turns 15 this month. (AP Photo/Dylan Lovan)

The sharks glided overhead while the kids below — protected by thick acrylic glass — are pointing, smiling and scrambling to take pictures of the hulking ocean predators.

They’re enjoying the view from inside the Newport Aquarium’s underwater tunnels, which were the country’s largest when the facility opened in 1999.

Years later, the aquarium is still a major hit, drawing oohs and aahs from kids and grown-ups alike as they pass under hundreds of thousands of gallons of luminescent sea water.

The aquarium turned 15 this month, and it has remained a top tourist attraction for Kentucky and the Cincinnati area over the years, with total attendance approaching 11 million. It’s also been an economic driver for Newport, a city of about 15,000, since opening on the Kentucky side of the Ohio River. 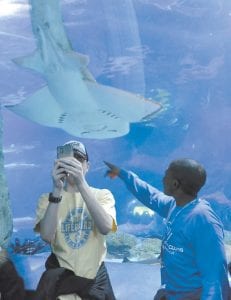 A visitor attempted to take a “selfie” with a shark ray at the Newport Aquarium recently. (AP Photo)

Aquarium attractions built since then, like Atlanta’s Georgia Aquarium, have longer tunnels and more gallons of water. But Newport’s has had a huge impact on this small Kentucky town, pouring in about a half-billion dollars into the greater Cincinnati area over the years, according to numbers provided by aquarium officials.

Gibula, who has worked at the aquarium since its opening, said it was conceived as an anchor for a downtown revitalization project. Newport on the Levee, an entertainment center with restaurants, movies and shopping, was built two years after the aquarium’s opening.

“It’s amazing how this city has changed in the 15 years,” he said. “It’s been a positive influence for the entire area.”

Sea turtles, stingrays, an octopus and plenty of other animals live at the aquarium, along with its newest resident, Bravo, an 85-year-old Galapagos turtle. The 650-pound turtle lives the aquarium’s newest exhibit, Turtle Canyon, which opened in late March.

At the end of the aquarium’s winding trail of exhibits is the popular penguin attraction, home to dozens of cold weather penguins. Gibula said they are the aquarium’s high-maintenance residents, needing constant 40-degree temperatures, hospital-grade air filtration and mountains of food.

“We have to get snow, they actually drink the snow,” Gibula said. “They like to let it melt in their mouths. That’s how they get their water. And they go to the bathroom every 20 minutes.”

Anaiah Jalloh, 9, was on his first trip to the aquarium in late March, shortly after the opening of Turtle Canyon. He was in the underwater tunnels, watching rare shark rays swim up one side of the half-cylinder shaped tunnel and down the other side.

“It’s really neat to see them close,” said Anaiah, who came to the aquarium from Columbus, Ohio, with his dad. The fourth-grader dreams of becoming a marine biologist.

Nearby, another young boy has his back to the tunnel glass, trying to take a selfie with a shark ray.

The aquarium is a big draw to the Cincinnati area, despite its location across the river in Kentucky, said Linda Antus, president of Cincinnati USA Regional Tourism. Antus said it is annually among the top draws alongside the Cincinnati Zoo and Reds baseball games.