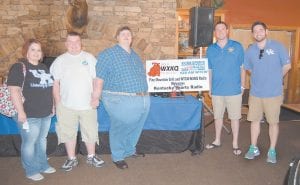 Kentucky Sports Radio personality Matt Jones (second from right) was at Pine Mountain Grill in Whitesburg Tuesday for a live broadcast of his popular radio program that is centered around University of Kentucky sports. The program is syndicated statewide and carried locally on WTCW-AM, whose staff members posed with Jones and co-host Drew Franklin (right) for this photo. Pictured from left are WXKQ/WTCW sales representative Beth Blair Wright, Larry Kevin Day, son of station manager Kevin Day (center), Jones and Franklin. The broadcast was the second of the KSR Summer Tour, which kicked off in Prestonsburg Monday and moved to Pikeville on Wednesday. (Photo by Sally Barto)