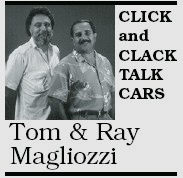 I have a 1999 Pontiac Sunfire that continually overheats. Despite replacing the thermostat, the sensor that operates the radiator fan and the radiator itself,

the car still overheats. Ironically, the faster I go, the less likely the car is to overheat. However, when I let the car idle, the temperature builds up very rapidly, and in only a minute or two the temperature gauge is in the red. Needless to say, I am at my wits’ end. I hope you can help me with some ideas about what could be causing this problem, and what I can do to fix it. Thanks! – Marland

RAY: Well, since it’s not overheating on the highway, you didn’t need the radiator, Marland. But I guess you know that by now.

TOM: Since it’s overheating at idle, that suggests it’s either the fan or something much more ominous. You’re not going to like our diagnosis, Marland.

RAY: You replaced the fan sensor, which is actually the coolant temperature sensor in this car. I’m going to assume that whoever did that ran the car after the repair was done, and saw that the fan was actually coming on and going off like it’s supposed to. If not, obviously that’s the first order of business. Because a nonfunctioning cooling fan – which could be due to a bad relay or a broken wire – could explain everything. Marland, you should be so lucky.

TOM: Right. Assuming you’ve already checked the fan, and it works, I think you have a bad head gasket, or a cracked head.

RAY: My brother has a cracked head. And he gets hot all the time, too.

TOM: If you have a bad head gasket, you’re continually pushing hot exhaust into the coolant and heating it up. At high speeds, you have enough air flowing through the radiator – from the rapid motion of the car – to dissipate that heat. But when you come to a stop, the cooling fan alone can’t produce enough air, and the temperature goes way up.

RAY: So if the fan is working, you need a head-gasket test, Marland. Then you’ll have to decide whether to fix it. Your mechanic might find, once he gets in there, that it’s the head itself, or that the frequent overheating has warped the cylinder head.

TOM: So beg your lucky stars for a bad cooling-fan relay, Marland. Because the price goes way up from there.