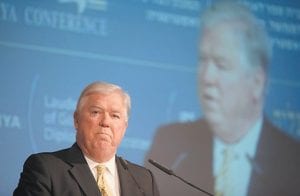 Mississippi Gov. Haley Barbour, a potential presidential candidate, will be in Kentucky later this week to meet with a group of coal operators who have a history of digging deep to help bankroll politicians friendly to the mining industry.

Kentucky Coal Association President Bill Bissett confirmed Tuesday that Barbour is scheduled to meet with up to 50 mining executives Thursday morning. Barbour would be the first potential 2012 presidential candidate to reach out to the coal-rich state.

Because Kentucky holds its primary in May, party nominations are all but determined before the state votes. Financially, however, coal operators in Appalachian states like Kentucky and West Virginia could still have a say in the primaries by opening their wallets to pro-mining candidates.

With corporate spending limits essentially lifted by the U.S. Supreme Court, mining companies would be free to spend unlimited amounts of money in the next election. Justices issued a ruling last year that permits corporations to spend their own funds on television commercials, mass mailings to the general public and other political activity that advocates for the election or defeat of candidates.

Kentucky GOP Chairman Steve Robertson said that ruling has changed the political playing field, raising the profile of coal states that previously have been overlooked by presidential candidates.

“I think a lot of individuals who will be looking to run for president are going to have an interest in Kentucky,” Robertson said.

Barbour has already started billing himself as a friend of the energy industry, including mining. In a speech in Mississippi on Tuesday, he called America “the Saudi Arabia of coal,” touting hundreds of years worth of reserves. But he complained that coal companies have difficulty getting federal regulators to allow them to open new mines.

“In America, it’s harder to get a permit to mine coal than it is to get a heart transplant today,” he said.

Candidates carrying that message are heralded by an industry that is accustomed to being assailed for environmental damage, not just from the process but also from emissions generated by burning the fossil fuel.

In West Virginia, retired Massey Energy CEO Don Blankenship has spent heavily on behalf of GOP candidates, including more than $1.8 million in 2006 to promote 41 hand-picked Republican candidates. He also spent $3.4 million to help elect the first Republican to that state’s Supreme Court in 2004.

Kentucky resident Patty Wallace, one of about 1,000 demonstrators at the Kentucky Capitol on Monday to decry environmental damage caused by mining, said she’s troubled that mining executives’ influence might grow in presidential politics.

“Look at their donations to every representative in the legislature,” Wallace said. “They own our legislators. They own our governor.”