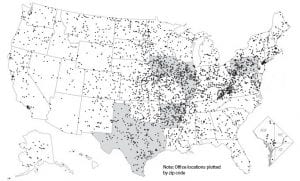 This graphic produced and published by The Washington Post earlier this year shows a large number of the post offices set for closing are located in eastern Kentucky and southern West Virginia.

The closing of nine small post offices in Letcher County and a regional sorting center in Hazard has been delayed for several weeks at least.

The U.S. Postal Service on Tuesday agreed to delay the closing of 252 mail processing centers and 3,700 local post offices until mid- May.

In a statement, the cash-strapped agency said it would hold off on closings by several weeks to give Congress more time to pass legislation that would give it more authority and liquidity to stave off bankruptcy. The Postal Service, which is expected to default Friday on a $5.5 billion payment to the Treasury, is forecast to lose a record $14.1 billion next year.

Tuesday’s decision was applauded by the National Newspaper Association, which represents 2,300 community newspapers, including The Mountain Eagle, that depend on the Postal Service to get their product to subscribers in a timely manner.

“I fully appreciate the financial challenges facing the Postal Service and agree it has excess capacity in its service network,” said Heath. “But I also believe that decisions to close smaller and more efficient plants with the goal of sweeping more mail into large urban facilities that have been the source of many service snarls in the past will turn out to be a mistake. We had already begun working with USPS on setting up transfer hubs in these smaller plant locations to try to divert some of our mail directly to local post offices within a plant’s service zone. Now, this delay gives me hope that we will have time to help USPS craft solutions that will minimize disruption.”

Last week, the Postal Service said it was moving forward on cutbacks. It had planned to begin closing processing centers as early as April, and shutter some post offices early next year.

“There continues to be extreme urgency, and our financial crisis continues,” said postal spokesman David Partenheimer. “But we’re hoping by working with senators and all members of Congress that they can pass comprehensive legislation that allows the Postal Service to return to profitability.”

The agreement by the Postal Service also means that cuts to first-class mail that would slow delivery and, for the first time in 40 years, eliminate the chance for stamped letters to arrive the next day, would not occur before May 15. Previously, the post office said it had hoped to implement the cuts to first-class service in April.

On Dec. 8, a group of 21 senators from mostly rural states led by Bernie Sanders, an independent from Vermont, signed a letter to congressional leaders asking them to add language to legislation that would halt closings for six months. The closures could cost 100,000 postal employees their jobs.

“What I feared very much is that the post office unilaterally would start making drastic cuts to processing plants, rural post offices and slow first-class mail service before Congress can pass postal reform,” Sanders said. “So it’s a step forward in terms of giving us time with certainty that rural post offi ces won’t be closed.”

In all, roughly 100,000 postal employees could be cut as a result of the various closures, resulting in savings of up to $6.5 billion a year.

The Postal Service, an independent agency of government, does not receive tax money, but it is subject to congressional control on major aspects of its opera- tions.

Separate bills that have passed House and Senate committees would give the Postal Service more authority to reduce delivery to five days a week, raise stamp prices and reduce health care and other labor costs.

The Senate bill would refund nearly $7 billion the Postal Service overpaid into a federal retirement fund, encourage a restructuring of health benefits and reduce the agency’s annual payments into a future retiree health account. No other agency or business is required to make such health prepayments.