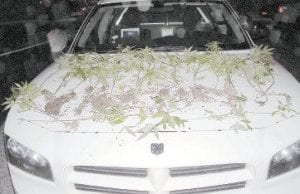 Pictured are some of the marijuana plants sheriff’s deputies and state police found growing at Pratt’s Branch.

Damron, Deputy Jason Bates and Kentucky State Police Trooper Randy Surber found three plots of marijuana plants about 250 feet up in the hills on July 6 after Bates had received an anonymous tip.

Damron said starter buckets used to grow the plants inside and then to transfer the plants outside when the weather became warmer were also found near the marijuana plants.

No arrests have been made. The case is still under investigation by Damron.

Damron asks that people stay away from marijuana that is growing because the area could be booby-trapped.

Anyone with information is asked to call the sheriff’s department at 633-2293.