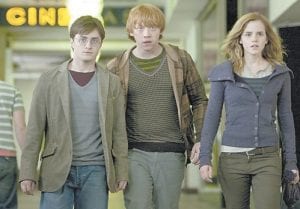 It’s going to be series business this holiday season at the movies. One of Hollywood’s biggest franchises is nearing an end. Others are returning after long absences. Still more Yuletide releases are taking baby steps toward becoming their own brand of sequels.

“With any of these, it’s the unwritten rule: it goes without saying that if it works well commercially, if there’s a following, the sequel is almost inevitable,” said Will Ferrell, who provides the voice of the title character in the animated comedy “Megamind,” which opens Friday to help launch the busy holiday movie season.

Other returning series and franchise wannabes this November and December include “Little Fockers,” reuniting the “Meet the Parents” gang; the C.S. Lewis fantasy “The Chronicles of Narnia: The Voyage of the Dawn Treader”; “Yogi Bear,” a big-screen take on the TV cartoon; “Gulliver’s Travels,” transplanting Jonathan Swift’s classic to modern times; and the science-fiction followup “Tron: Legacy.”

Of course, the holiday heavyweight is the next-to-last bigscreen adventure of the world’s favorite teen wizard. “Harry Potter and the Deathly Hallows,” the final book in J.K. Rowling’s fantasy phenomenon, comes to theaters in two parts, the first on Nov. 19, the second next July.

The finale sends Harry (Daniel Radcliffe) and pals Hermione (Emma Watson) and Ron (Rupert Grint) out on the road toward a last showdown with evil Voldemort (Ralph Fiennes).

After spending the last decade — roughly half their lives — on the “Harry Potter” films, the young stars felt greater urgency to satisfy fans with a big finish, Radcliffe said.

“We owe it to them as much as to ourselves to do a fantastic job on these last films,” Radcliff e said. “We know we’ve got this incredibly supportive fan base, and we know that huge amounts of people will see the films, and rather than frightening us, it just inspired us to make it the best we could.”

Here’s a look at other holiday highlights:

“Low and behold, I come across the day where I actually defeat him and control the city,” Ferrell said. “I have everything I always dreamed of, and I’m miserable.”

Also featuring the voices of Tina Fey and Jonah Hill, “Megamind” forces its villain to join the good guys to stop a new menace that threatens the city.

Other family tales this season include “Yogi Bear,” featuring the voices of Dan Aykroyd and Justin Timberlake as the picnic-pilfering bear and his sidekick Boo Boo; and “The Nutcracker in 3D,” with John Turturro and Elle Fanning in a new adaptation of Tchaikovsky’s holiday favorite.

Returning after a six-year absence are Ben Stiller and Robert De Niro in “Little Fockers,” the third installment in the “Meet the Parents” comedy series.

“You tell me,” De Niro said. “Listen, if it works, I’m happy about it. I guess people connect with it in a certain way. The whole family thing. Anybody can relate to it, in-laws and so on. All the difficulties.”

Back after a 28-year gap is a followup to “Tron,” with Jeff Bridges reprising his role as a computer genius trapped in a deadly video-game virtual reality. “Tron: Legacy” features Garrett Hedlund as Bridges’ son, on a search for his missing father.

Bridges also plays Rooster Cogburn, a role originated by John Wayne, for a new take on the “True Grit.” Joel and Ethan Coen direct and Matt Damon co-stars in the Western about a dauntless girl who hires a tough marshal to track her father’s killer.

Russell Crowe is an average guy planning a prison break in “The Next Three Days,” the latest from director Paul Haggis, who made 2005 Academy Awards champ “Crash.”

Crowe plays a college instructor rooting out weaknesses in prison security so he can free his wife (Elizabeth Banks) for a murder she claims she didn’t commit.

“There’s a very small list of motivations that are greater than this,” Crowe said. “The woman that he loves, who in his heart he knows is completely innocent of this situation. Is he going to stand by and watch her life drain away?”

Among other action tales: “Unstoppable” stars Denzel Washington and Chris Pine as railroad workers racing to halt a runaway train loaded with toxins; “Faster” features Dwayne Johnson as an excon pursued by a retiring cop (Billy Bob Thornton) and a hitman; an extraterrestrial menace threatens to destroy humanity in “Skyline,” as hypnotic lights appear over Los Angeles.

WOMEN AND SONG
Mandy Moore lets her hair down as Rapunzel, the fairy-tale princess whose long locks are her ticket out of imprisonment in a tower, in Disney’s animated musical “Tangled.”

Christina Aguilera plays a waitress aiming to join the flashy musical revues at the club where she works in “Burlesque,” which costars Cher, Stanley Tucci, Kristen Bell and Julianne Hough.

Gwyneth Paltrow’s a country music star fresh out of rehab and trying to revive her career on tour with a rising singer (Garrett Hedlund) in “Country Strong,” which also features Tim McGraw.

Reese Witherspoon lands in a love triangle in “How Do You Know,” co-starring with Owen Wilson, Paul Rudd and Jack Nicholson in the latest mix of comedy and drama from director James L. Brooks (“Terms of Endearment,” ‘’As Good as It Gets”).

Career issues abound on screen: “Morning Glory” features Harrison Ford as a tough newsman and Diane Keaton as an ex-beauty queen who clash after their producer (Rachel McAdams) pairs them as morning TV hosts; “The Fighter” presents Christian Bale as troubled real-life boxer Dickie Eklund, who helped guide his half-brother Micky Ward (Mark Wahlberg) to triumph in the ring; Naomi Watts and Sean Penn star in “Fair Game,” the story of CIA operative Valerie Plame, whose cover was blown by a Bush administration leak; “Black Swan” stars Natalie Portman as a ballerina whose dark side emerges amid competition with a new rival (Mila Kunis); “The Company Men” stars Ben Affleck, Tommy Lee Jones, Chris Cooper and Kevin Costner in a tale of executives downsized out of a job.

“The Tourist” pairs Johnny Depp and Angelina Jolie in a thriller about a brokenhearted traveler swept up in danger with a mystery woman in Europe.