Learn about the science behind the magic 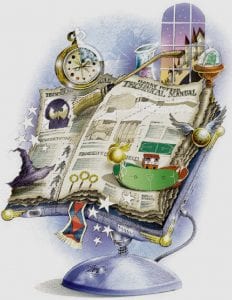 Is there such a thing as a Sorcerer’s Stone? Will Muggles ever be able to play Quidditch? And could Dumbledore’s street lamp clicker really work?

Rebecca Moore Peterson, a professor at Penn State’s Eberly College of Science (and a big “Harry Potter” fan), says there’s actually quite a bit of science behind many devices in the J.K. Rowling series.

Peterson invited children of all ages to pose their best Harry Potter science questions via e-mail. Here are some of the questions with Peterson’s answers.

Q: How does Dumbledore’s street lamp clicker work? Is it an electromagnetic pulse?

A: An excellent guess! Yes, it is an electromagnetic pulse similar to the one created by your television remote when it turns on your TV. But Dumbledore probably developed this clicker as a result of things he learned from James Clerk Maxwell (1831-1879).

Maxwell was an important Muggle scientist who developed the electromagnetic theory of light. This theory showed how light, electricity and magnetism are all related to one another. As a result, many practical communication systems, such as television, radio, radar and cellular phones, have been developed. In the not too distant past, the existence of these technologies seemed completely impossible – or perhaps I should say magical!

Q: Is it really possible to petrify someone?

A: Unfortunately, it is possible to render someone frozen or almost motionless. Although this is not caused by looking into the eyes of a Basilisk, some people have been “petrified” by injecting themselves with certain illegal drugs. In the summer of 1982, a few heroin users injected themselves with heroin contaminated with MPTP.

This chemical is highly toxic to the brain, and it targets many of the same cells that are affected by Parkinson’s disease. Parkinson’s disease is characterized by stiff limbs, slowness of movement and tremors. It afflicts about 1.5 million Americans, including Michael J. Fox, an actor and visible advocate for Parkinson’s research. MPTP has provided scientists with clues in their search to find a cure for

Q: Why can’t Quidditch be played on broomsticks in the real world?

A: Actually, it could be. But the “broomstick” would look very different than it does in Harry Potter’s world. Playing Quidditch involves being able to takeoff from the ground without a running start (like a rocket), to glide and turn in the air (like jets and airplanes) and to stop, start and hover in midair (like helicopters). So, in principle, we already know how to make a Nimbus 2000 or 2001.

However, it is very difficult to design one object that can do all of these different things together and still make it safe and small enough to use on a Quidditch field, as well as inexpensive enough for people to afford. If you learn a lot about forces, propulsion and aerodynamics, perhaps you will be the first to invent such a device!

Q: Can you disappear from one place and appear in another?

A: Matter cannot disappear from one place and appear in another, but people can give the illusion that this is true. Famous illusionists have created many ways to make people and things “disappear.”

Q: Is it really possible to levitate?

A: Yes! It’s not exactly done by saying “Leviosa” and pointing your wand, but there are several real, nonmagical ways to levitate. For example, a material called a superconductor can create strong electromagnets that are used to levitate a special train above its tracks so it can travel at very high speeds. In addition, a hovercraft levitates upon a cushion of air.

Q: Why don’t we use owls to deliver our mail?

A: Owls are smart birds, but there are many reasons our postal system doesn’t use them to deliver our mail. (Can you think of any?) However, throughout history, birds have been used by people to deliver short messages.

Q: Can anyone talk to animals like Harry can talk to snakes?

A: Communication between humans and other animals takes place in a number of different ways, and it depends on the two animals learning how to communicate with one another. Just ask anyone who has a special pet, and

they will probably tell you that they have learned to communicate in some way with the animal in their lives.

Many scientists are studying the languages of different animal species by recording the animals’ vocalizations, or sounds, and attempting to decipher their meanings. These researchers are learning more and more about animal languages, and, in some cases, scientists are starting to duplicate parts of animal speech.