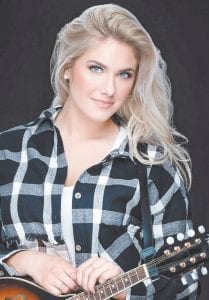 Baker, originally from Pound, Va., is touted as a new “coal miner’s daughter,” and her debut single “Burn” reached No. 54 on the Music Row Breakout chart in 2015. Her single “Coal Train” was included on the Academy of Country Music Awards Zine Pak CD, which debuted at No. 4 on the Billboard Country Albums Chart.

The concert in Whitesburg will begin at 7 p.m. at the Mountain Heritage Stage on Depot Street.

Baker is the first of ten acts who will play in Whitesburg as part of the Levitt Amp Series. The shows will include genres from traditional Appalachian music to blues, rock, Latin/African, and Arabian jazz. e shows will be held

Th every Thursday except Independence Day, beginning May 30 and ending August 8.

“The Levitt Foundation requires that the lineup be diverse, that we hit different musical genres, not just the same thing,” said Valerie Horn, of Cowan Community Center, which received the grant for the concert series. 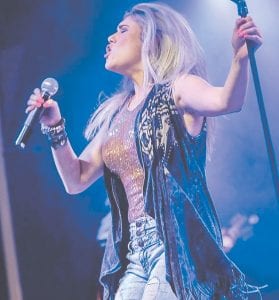 Country music singer Kaitlyn Baker, a native of nearby Pound, Virginia, will perform in Whitesburg this Thursday night for the first of 10 free concerts by 10 separate acts.

Cowan Community Center’s main partner for the series is the City of Whitesburg, but other partners include the Mountain Heritage Committee, the Letcher County/Whitesburg Farmer’s Market and Appalshop. Appalachian Regional Healthcare is the presenting sponsor, with other sponsors including Double Kwik, Appalachian Impact Fund, MCHC, Appalachian Groundswell, Apogee Environmental, MACED, Community Trust Bank, and Appalshop.

Some of the music will be different than that which most people in Letcher County might be familiar. La Misa Nigra, a fusion band from Oakland, Calif., performs music rooted in Latin America and Africa, and Farah Siraj, a Jordanian, took her song “Zariya” to Number 1 in India and the Middle East.

Siraj, named as Jordan’s “Musical Ambassadress,” has performed at the John F. Kennedy Center for the Performing Arts in Washington, the Lincoln Center in New York, the Nobel Peace Prize Forum, and for King Abdullah II and Queen Rania of Jordan. She represents her nation annually on United Nations World Peace Day.

“The goal of the Levitt Amp is to grow community through access to free live music, and the key word there is access — available to all,” Horn said.

On the more familiar side is Baker, who has moved to Nashville and is making a play for country stardom with her EP “Blackbird,” which features the songs “Coal Train,” and “Burn,” the song that inspired Kaitlyn Baker’s BURN Sauce, a hot sauce produced by Pepper Palace in Sevierville, Tenn.

The most well known artists in the series might be Americana musician Webb Wilder and blues guitarist Samantha Fish.

Wilder has been performing his eclectic brand of “cow punk” — a mix of blues, rockabilly, and country — since 1986. Wilder is well known for such novel creations as “Human Cannonball,” “The Devil’s Right Hand,” “Hittin’ Where it Hurts,” and “Loud Music.”

Fish is a singer-songwriter who also plays blues guitar in a slide style reminiscent of Bonnie Raitt and Elmore James. Fish’s songs include “Don’t Say You Love Me,” “No Angels,” and “Black Wind Howlin’.”

The Mortimer and Mimi Levitt Foundation announced the grant on December 18.

Whitesburg is one of three cities in the state that will host the Levitt Amp Concert Series. The others are Berea and Middlesboro. Middlesboro has had the series for four years and received a multi-year grant this year funding concerts through 2021.

This will be the second year that Cowan Community Center and the City of Whitesburg have partnered for the concert series.

The outdoor concerts will be held at the Mountain Heritage Stage on Depot Street, and will feature a different kind of music each week.

The complete lineup is as follows: