Power loss a threat to ill at home 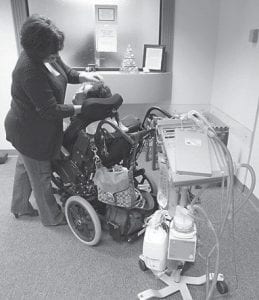 Kristin Graham, left, comforted her son Gatlin during a recent visit to the doctor in Houston. (AP Photo)

For many of the growing millions who depend on home medical equipment, a power outage goes way beyond the inconvenience most of us feel. It could be deadly.

It’s an issue that snuck up on emergency officials as better medical treatments over the past decade have helped more critically ill people not only survive but move out of nursing homes.

The Associated Press found emergency planners around the country struggling to find new ways to identify people at risk before the lights go out, to ensure they will have the aid they need to survive small outages or big ones.

How serious is the problem?

A generator and stack of batteries couldn’t keep up with Gatlan Graham’s ventilator and other life-supporting equipment when Hurricane Ike knocked out power to his Houston home for 14 days in September. The family fled in search of electricity, spending more than $1,500 to keep the 17- year-old alive.

Utilities in every state operate “medical priority lists” designed to track who depends on power for life. But an AP survey found huge state-to-state variations that suggest only a fraction of patients know they could sign up. Illinois’ biggest utilities together report 10,000 patients on critical care lists, for example. Neighboring Indiana’s biggest list carries just 2,000 names.

Even if patients did sign up, in large outages companies don’t have the ability to restore power to one home before another down the street. The lists may offer false hope.

“This is a huge vulnerability,” added Dr. Lewis Rubinson of the University of Washington, who advises the government on disaster preparations and separately is preparing guidelines for emergency oxygen supplies. “This is something that patients should demand.”

Roughly 2 million people use home oxygen machines, mostly “concentrators” that make oxygen on the spot as long as electricity flows. Just a few years ago, oxygen-gas tanks that don’t require home electricity were the norm.

There even are a few remaining users of those body-encasing iron lungs infamous from the polio era; Moore counts 19 in Houston-area homes. Last May, a Tennessee woman who spent nearly 60 years in an iron lung after childhood polio died when the power went out and her family couldn’t get an emergency generator working.

Ventilators and heart pumps have internal batteries that last 45 minutes to a few hours, time to put on longer-lasting batteries or get to help. Some portable oxygen concentrators can run on batteries for three hours or four hours or be plugged into a car adapter, but patients typically depend on oxygen suppliers to deliver old-fashioned tanks of the gas for emergency use. Back-ups sometimes fail even in short outages.

When the power went out in Carpentersville, Ill., the implanted pump powering Jack Bostwick’s heart stopped, too, a week after the 60-year-old’s optimistic discharge from the hospital in May 2007. The device’s internal emergency battery somehow had dislodged, apparently giving him no time to insert longer-lasting ones. His family asks why Bostwick, newly registered on the utility’s critical-care list, wasn’t warned about a planned outage for pole repair. The utility declined comment because of a pending lawsuit.

“I thought I was prepared,” said Houston’s Kristin Graham. Before Hurricane Ike, she readied a generator, gasoline and rechargeable batteries that could run son Gatlan’s ventilator for six hours to nine hours on a charge, and his oxygen machine for another few hours.

But the outage lasted so long, Graham said: “We couldn’t afford to buy the highest-powered generator on the market. You can’t run that generator 24 hours. You run it a couple of hours, you let it rest a couple of hours. I could never get all the batteries recharged.”

Graham signed up for her utility’s priority list and Houston’s 211 emergency service, but said no one checked if she needed aid. Ultimately she loaded Gatlan, his medical equipment and his 4- and 8-yearold siblings into the family van and checked into a hotel room, first in a less hardhit Houston area and later in cheaper Austin, to get electricity.

“I don’t know what people would do if they didn’t have a way to get out on their own,” she said. “No one cared this time if you were on a critical list. They couldn’t. It was too broad.”

When it comes to oxygen, many home healthcare companies “bend over backward” to race tanks to customers during power outages, noted Washington’s Rubinson.

But if roads are impassable or the disaster’s too big, home oxygen may not be delivered.