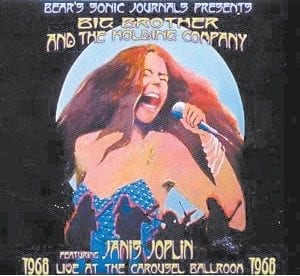 The cover of Live at the Carousel Ballroom 1968 is seen.

Just a short time before it became known as The Fillmore West, San Francisco’s Carousel Ballroom hosted Janis Joplin and her first band Big Brother and the Holding Company for two shows in June 1968.

This week, Columbia/Legacy released a live recording of the June 23, 1968 show that was preserved on tape that night by Owsley Stanley III, a legendary soundman and Kentucky native known best for manufacturing the hallucinogen LSD that fueled the psychedelic rock era that began in San Francisco in the 1960’s.

The release of Live at the Carousel Ballroom 1968 marks the one-year anniversary of the death of Owsley, also known as “Bear,” who was killed March 12, 2011 in a car crash in his adopted homeland of Australia. In addition to recording the original show, Owsley, the grandson of a former Kentucky governor and U.S. Congressman, also produced the album and supervised its mastering.

“I believe this album will be hailed as the definitive Big Brother live album of all time,” Stanley wrote before his death. “If perhaps on some other night they gave a better and more energetic performance, I don’t know — I wasn’t lucky enough to be present at it. I was at this one, and I thought at the time it was exceptional. … This is Janis at her absolute peak, and the band was rarely so ‘on’ as they were at these shows. They were kicking ass and having a hell of a good time.”

Before the Crousel was purchased by the late concert promoter Bill Graham and renamed The Fillmore West in autumn 1968, it was operated as a collective formed by the psychedelic bands the Grateful Dead, Jefferson Airplane, Quicksilver Messenger Service and Big Brother and the Holding Company. Owsley, who began mixing live sound with the Dead in 1966, ran the sound system at the Carousel and his work is generally regarded as the gold standard for live concerts from the psychedelic era.

Among the 14 songs included on the recording are powerful versions of the Joplin/Big Brother classics “Ball and Chain” (written by Big Mama Thornton) and “Down On Me.” Every song sounds as if it were recorded using the best equipment available today.

“In those less technically enlightened times it was a constant complaint that bands could never duplicate their live shows on record,” rock critic Jaan Uhelszki writes in an essay included with the recording. “But on this weekend they did. … These 14 songs are a testament to what a force of nature Janis Joplin and Big Brother and the Holding Company was during those two nights.”