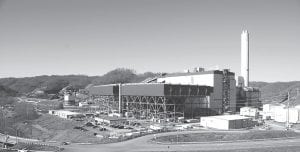 McDonnell joined leaders from the Richmond-based energy provider on Sept. 27 for a dedication of the 585-megawatt power station in St. Paul.

The company first announced commercial operation of the plant in July as it works to meet an anticipated growth of nearly 4,000 megawatts in electricity demand in Virginia during the next decade.

Dominion says the $1.8 billion power station uses coal, waste coal and biomass to produce enough to power 146,000 homes at peak demand. The company says the station is among the cleanest U.S. coal-fired power stations in terms of air emissions.

The station is expected to generate $258 million annually for the southwest Virginia economy.

McDonnell was referring to 85 full-time employees hired to run Dominion’ plant and the $6 million in estimated annual tax revenue to Wise County.

The ceremony was held near the dozens of goliath cooling unit fan blades spinning roughly four stories above the ground, a sight that commands most of the attention when walking through the plant.

Construction began in 2008, following a permitting process that included a long and contentious public hearing during which environmentalists and other activists opposed the use of coal and mining methods used in the region.

“I’m sure no one thought Dominion would take on the commitment once we got past the air board,” said Sen. Phillip Puckett, D-Lebanon. “We’ve seen an attack that has been on coal-fired plants.”

Officials last week hailed the plant as a high-tech marvel built to generate clean energy for 146,000 homes. It is also lamented as one of the last of its kind.

“ You hear that noise over there?” Dominion President and CEO Thomas F. Farrell II asked. “That’s electricity being made in one of the last coal-fired plants that will ever be built in the United States.”