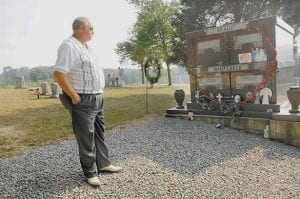 Jack Whittaker should be living a fantasy after winning a nearly $315 million jackpot in 2002. But his life since then has been a downward spiral, punctuated by well-publicized indiscretions such as philandering and drunken driving.

Whittaker sat down with The Associated Press recently to discuss his gambling, his troubles and his personal losses.

AP: Is the thrill gone?

Whittaker: Yeah, the thrill’s gone. I still play the Powerball. Yeah, just to aggravate people. Whenever I go in there and buy $100 worth of tickets, there’s always somebody’s got something smart to say. You know, one thing about me is I know I can win it. You guys all buy and you think you can’t win … But no matter where you go, they’ve all got something to say if you buy $100 worth of tickets. It’s like you robbed a bank or something.

AP: What are your tips for lotto players?

AP: How did you meet women?

Whittaker: I’m out every day. I go out, and I might be working up here one day and down there and always go to lunch. And at that time, I always went out in the afternoons and had me a couple drinks before I’d go home in the evenings. I just had to beat ’em off once I won the lottery because everybody wanted to get close to me. It was like, ‘Here I am, you can have me.’ It wasn’t anybody wanted paying. It was like hiding from ’em. You’d run into a certain type of woman and you’d have to hide from her.

AP: What do you invest in?

Whittaker: I invest in myself. I have five of these car lots that I finance all the paperwork. Nobody lends these guys a dime. When they come in, Jack Whittaker is the finance company. We build and sell homes the same way.

AP: Is it hard to go out in public anywhere since you’re so recognizable in West Virginia?

Whittaker: I don’t really go much places in public. I go to court a lot. That’s public. That’s about as public as you can get, especially if you can’t make the judge keep the cameras out.

I just, I don’t want to go anywhere. I’ve been on one vacation in the last three years. Went to Myrtle Beach.

Me and my granddaughter, when she was alive, we used to go to Myrtle Beach and Atlantic City. Sometimes twice a week. But I just don’t like going without her … It’s just not the same without her by my side. It’s just like, it’s an empty feeling when I get there. As soon as I get there, I want to come back home.