Alex Poythress missed most of last season with a knee injury, yet Kentucky coach John Calipari insists that the success of this year’s team will “center around Alex” and his performance at power forward.

“We do not have a beast, and that can be Alex,” said Calipari. “There is no one else like him (on our team). No one that physical and tough. Just the ability he has to get balls and make plays. Nobody else on the team is like that. If he does what he can do, the rest of the guys will fall into what they are.

Calipari tried to convert Poythress to a small forward last season to enhance his chances in the NBA. However, with the NBA going to smaller lineups, Poythress cannot possibly play power forward at the next level and move back to what Calipari feels is his natural position this season. 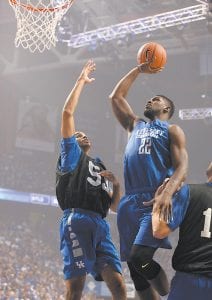 BIG PIECE OF PUZZLE RETURNS — Alex Poythress was back on the court for Big Blue Madness. Kentucky coach John Calipari says the team needs him to be a “beast” this season. (Photo by Vicky Graff )

“He can be a skilled 4 (power forward) and a beast 4,” Calipari said. “He has grown so much as a person and graduates in three years. He’s grown as a player and then he got hurt and that set him back. I just want this to work for him.”

He came to UK from Clarksville, Tennessee as a five-star player many projected as another one-and-done player for Calipari. The start of his freshman season was spectacular before his numbers tailed off. The slide continued his sophomore year and then he was injured last year.

“I am past the frustrated part. I can run, jump, all that stuff. Everything is on schedule and I am making sure I do all I can to be 100 percent,” Poythress said in a preseason interview.

Does he see this as a second chance to shine or a missed opportunity for not getting to play most of last year?

“You can look at it different ways. I just look as blessing in disguise and make the best of the situation,” Poythress said.

He said the outpouring of love from UK fans touched him and helped with his rehabilitation.

“Just appreciate all the love I got from them. Maybe surprised me a little bit,” he said. “My teammates did a great job making sure I was included and still felt a part of the team. It made me appreciate my teammates even more and now I want to make sure my teammates this year are doing the right things. I will check up on everybody.”

He knows he’s expected to be a team leader this season.

“He (Calipari) is not accepting anything less. When I get healthy, it is time to go full speed. That is pretty much what I wanted,” Poythress said. “I feel like I have been here a long time, but it is only four years. It’s not that long but it feels that long.

“I feel more comfortable now than when I got here. I have seen everything and experienced everything, so I know what to expect. All that stuff I’ve been through. I can talk to the new guys and tell them what they need to hear and do. They are always listening and doing the right things, too.”

Poythress said he has matured and accepted the spotlight he’s in at Kentucky daily.

“I am just nonchalant, a laid back guy. That’s the way I have always been,” Poythress said. “There is no extra pressure on me. There is always pressure and expectations with being at Kentucky, but I have been through it all so I don’t feel any added pressure.

“I welcome the challenge awaiting me this year and can’t wait to get on the court. I just want to play better, play harder, compete more.”

He’s been in the gym often working on his 3-point shot after his percentage dropped since his arrival at Kentucky.

“I could always hit that shot. I have always been able to shoot. Some say I can’t shoot but I know I can. I do it in practice. Now I have got to do it in games,” Poythress said.

That’s the message he hears often from assistant coach Kenny Payne, who he calls a “great mentor” for him.

“He is always pushing me to be the best. I have known him since he was recruiting me,” Poythress said. “That is my dude right there. He is the guy I would go to first if something happened. It helps a lot having someone like that you are real close to when you need something and he’s always been there for me.”

After obtaining his Bachelor’s degree in three years, Poythress is working on a Master’s degree in sports leadership. “I can see myself working for a sports company like Nike. I have always wanted to do something like that or just something around sports,” he said.

Poythress likes what he has seen from newcomers Skal Labissiere and Isaac Humphries.

“Skal competes. He is in my weightlifting group. He is always trying to get stronger and set goals. Really, all the new guys love to compete and get better,” Poythress said. “I have not been around an Australian before, but I think Isaac will be fine. I feel like it will help Skal and Marcus (Lee) to have somebody bigger to go against every day in practice.”

For the second time this season, coach Mark Stoops’s Cats failed to deliver a season changing win when they had a chance at Commonwealth Stadium. However, the loss to Auburn last week did not take away from the big-time atmosphere in Lexington for the first Thursday night game ever at Commonwealth.

“I thought it was great. It was great. Really special night, fans were up, I saw them standing,” Stoops said. “And again, we just were so close (like they were against Florida earlier). We just could never get that momentum and get on top and that’s probably what’s going to bother you. We have had opportunities to get the game tied or get ahead and just couldn’t do it.

“Couldn’t get the fans really juiced up and really into it. But they were. We could have really done our part, but really appreciate the atmosphere and the effort. It was a fantastic environment.”

The atmosphere started with a Montgomery Gentry concert, another effort UK officials have made this year to help the pregame atmosphere.

“I was just blown away by the crowd,” Montgomery Gentry guitarist Bo Garrett said. “You come out and just see all that blue out there. I didn’t know exactly what to do. But it was a beautiful thing to see.”

The show had one surprise for fans — Marlana VanHoose of Denver, Ky. She has been blind since birth and has cerebral palsy, but can certainly sing. She joined Montgomery Gentry on stage to sing one of their biggest hits, “My Town.” She had been scheduled to sing the national anthem before the game and since she is a Montgomery Gentry fan, they had her come on stage to sing and later posed for pictures with her. She also led the crowd in the “CATS” cheer as Montgomery and Gentry urged her on.

Again, another smart move by UK officials to have her at the game.

Even though it has been a week, I am still not sure I’ll ever understand why UK running back Stanley “Boom” Williams didn’t touch the ball the second quarter of the Auburn loss. You might remember that Williams turned a busted play into a 60-yard run in the first quarter. He’s also the same back who took the opening play of the season for a 75-yard scoring run.

“All of us know he’s very explosive. I know he can make plays,” receiver Garrett Johnson said.

Offensive coordinator Shannon Dawson said he didn’t know why Williams, who finished the game with 16 carries, didn’t get the ball the second quarter. If he didn’t know, wonder who did.

“He was tired. We took him out for a little while because he was tired. He had a big first quarter. He’s not a Nintendo little guy. He gets tired,” Dawson said.

Maybe, but I doubt he was so tired that he could not have carried the ball a time or two, especially with the way UK’s offense struggled in the second quarter.

Guards Tyler Ulis and Jamal Murray often go against each other in practice even though both likely will be in the starting lineup when Calipari’s team opens the season.

Can Ulis guard the bigger Murray? “Anybody can guard anybody,” Murray said.

Can he stop you? “Can he stop me? There are not many people that can stop me now,” Murray smiled and said.

Ulis laughed when he heard what Murray said.

“I don’t know how to explain that. Once Jamal gets hot, he gets hot,” Ulis said. “So if he is on a hot day, there is no stopping him even if I am right in front of him. He is just going to throw it up and it is going to go in. But I can stop him. I don’t know what he is talking about. But some days if he is hot, it’s hard to contain him.”

If you have a comment, suggestion or criticism, contact me at larryvau@gmail.com or on Twitter at @vaughtsviews. The only thing I have enjoyed more than covering Kentucky football and basketball for over 40 years is interacting with UK fans.