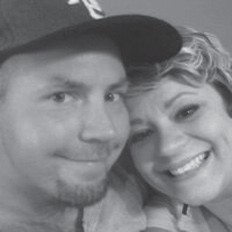 We have a family here on Colson that desperately needs everyone to ask God to let everything be okay. B-Rob (Brandon Robinson), as he is known to his friends and co-workers, is now going through another bout with cancer. He had a brain tumor removed about six years ago. He then had to follow that up with chemo. Since then he had stayed cancer free until a few weeks ago. Now the tumor is back and larger than the other one. The doctors are now planning on a treatment and deciding if this one can be removed.

Brandon’s wife’s Stephanie’s mother, Gail Whitaker, is also going through her own battle with cancer. This family has done so much for our county and we need to all be in prayer for them through this.

We also need to be in prayer for Billy and Connie Adams. These are the parents of the late Keith Adams. They are still having lots of health problems related to the wreck and are still trying to deal with Keith’s death. Billy and Connie have been faithful members of Millstone Missionary Baptist Church for many years. 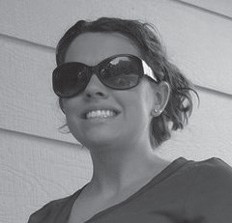 Jennifer Holbrook Crisp’s birthday will be on the 14th.

Prayers were answered for my cousin’s son-in-law. Helen Sue and Bobby Hall’s daughter Missy posted today that the test results came back for her husband Ryan Hardee. They had found a spot on his pancreas and ran tests to see if it was cancer. This was wonderful news and they are thanking everyone that prayed for them.

I had a wonderful time at the Whitesburg Farmer’s Market Saturday. I love talking to Vernetta Roark because it seems no matter what she’s going through, she will always say she’s blessed when you ask her how she is. I also got to actually see and talk to Lizzie Mae Wright. She doesn’t look a day older than she did when I joined the Letcher County Senior Citizens over four years ago.

My sister, Charlene Tacket Mason, and I enjoyed the smoothies and the sandwiches that were served there Saturday. Brandon Fleming was grilling and made Charlene a really great sandwich and it only cost $2. It was a nice, cool day and of course we were there at 9 a.m., so we could make sure and get some corn to put up. 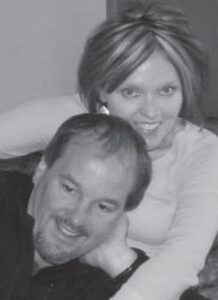 Tony Collins had a birthday on the 9th. He is pictured with his wife, Mattie Collins.

Speaking of corn, last week I had talked about how we liked giving our surplus garden stuff away. Well one of my long ago classmates that also lives in Stinking Branch came up and got some cucumbers and traded it to some peaches and cream corn. Needless to say, I spent Saturday evening putting up corn and when Yonts came home from work he joined right in.

Remember last week how I talked about how some of the people I grew up with on Colson are still living right here? Well, the Begley family are some of those people. As I’ve said before my brother, Albert Tacket, has moved back home from North Carolina and he finally got to see and talk to his ole buddy, Leonard Begley. Leonard had been trying his best to catch up with Albert since he moved back and so they finally made plans to have a cookout and break in the “Bunkhouse” Leonard and his cousin, Mike Coots, have been building this year. Albert had a great time being with them and talking about all the good times we had growing up. 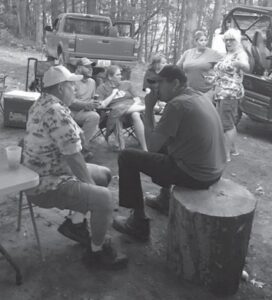 Pictured at the Begley “Bunkhouse” cookout are Roy Parker and Albert Tacket in the foreground, Phyllis Begley Combs on the far right and Keela Parker Ratliff.

Mike said Albert told them all about how mean we sisters were to him when we were growing up. I told Mike, I don’t think you have heard all the details. So, here go the details.

When we were home we would play “house” all the time. This is where you pretended to be grown up and you had to take care of your house. We would find some of Mom’s house dresses and wear them over our clothes and each of us would claim one of the rooms in the house for their “house”. We would visit with each other back and forth and just talk as if we were grown and had a husband and family to take care of.

Of course, Albert didn’t get to play with us in this pretend game. Well, he would always get upset ‘cause we wouldn’t let him play and would go and cry to Mom. One day she told us we had to let him play. I don’t remember if we all got together and decided on how we could trick him or not, I just know it just so happened our husband needed to go to work and so that’s what we told him he was, the husband. He left for work and was satisfied and didn’t bother us while we played “house”.

So, I guess this little cookout was payback for us not letting Albert play with us. Because none of us sisters got invitations or even knew about this little cookout. Some of those that were invited and attended were Phyllis Begley Combs and her husband Stanley Combs, Roy and Kathy Begley Parker, Leonard Begley and his granddaughter Toni Begley, Mike Coots, Sandra Sexton Wilson, Steven and Keela Parker Ratliff, Owen Parker and his girlfriend, David and Chandra Turner and their daughter, and Athelene Begley Parker.

The birthdays are Tony Collins (husband of the wonderful and most thoughtful person on the planet, Mattie Collins) on the 9th, also on the 9th William and Kathy Runyon celebrated their 46th wedding anniversary and Drew and Cassie Riffe McCool-Solis celebrated their 7th. Terriena Adams Sparks had a birthday on the 10th. Jeffrey Pike and Bridget Back will have birthdays on the 11th. Gleadith Bentley Duncil and Janet Slone Hall will celebrate on the 12th, Richard Brown on the 13th, Jennifer Lynn Holbrook Crisp and Marcia Sanders Hall on the 14th. Denise Yonts will have a birthday on the 15th. Tommye Banks, Haley Whitaker Johnson and her twin brother Trenton Whitaker, and Faye Martin’s birthdays are on the 16th.

Please remember to keep our schoolchildren and all the staff in your thoughts and prayers. I have one grandchild in Martha Jane Potter and one in Letcher County Central and we pray for their protection. Their lives were forever changed last March and I dread it for them. I hope they don’t have to go back to virtual, and I know they don’t want to either. Our pastor, Bill Jones, said Sunday he didn’t want to go back to “kitchen church”, but we may have to. Be in prayer for our churches and especially my pastor Bill Jones and his family.

Oma Hatton’s boy Billy Hatton came by Mom’s today to see her and get a mess of half runners. Mom was tickled to death to see him and he was her too. Mommy told him Oma was her best friend. She surely does miss her. And speaking of Oma, remember her plea for us to be in church.