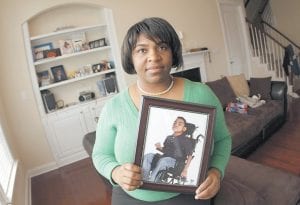 Beatrice Diaz holds a photograph of her son Garrison, 8, at her home in Chapel Hill, N.C. Diaz unexpectedly went into labor at 24 weeks while pregnant with Garrison, who after delivery was so fragile she was not even allowed to hold him for a month. Today he is in a wheelchair and has the mental capacity of a 9-month old. (AP Photo/Jim R. Bounds)

The price of preventing preterm labor is going through the roof.

That’s because the drug, a form of progesterone given as a weekly shot, has been made cheaply for years, mixed in special pharmacies that custom-compound treatments that are not federally approved.

But recently, KV Pharmaceutical of suburban St.Louis won government approval to exclusively sell the drug, known as Makena (Mah-KEE’-Nah). The March of Dimes and many obstetricians supported that because it means quality will be more consistent and it will be easier to get.

None of them anticipated the dramatic price hike, though — especially since most of the cost for development and research was shouldered by others in the past.

“That’s a huge increase for something that can’t be costing them that much to make. For crying out loud, this is about making money,” said Dr. Roger Snow, deputy medical director for Massachusetts’ Medicaid program.

“I’ve never seen anything as outrageous as this,” said Dr. Arnold Cohen, an obstetrician at Albert Einstein Medical Center in Philadelphia.

Doctors say the price hike may deter low-income women from getting the drug, leading to more premature births. And it will certainly be a huge financial burden for health insurance companies and government programs that have been paying for it.

The cost is justified to avoid the mental and physical disabilities that can come with very premature births, said KV Pharmaceutical chief executive Gregory J. Divis Jr. The cost of care for a preemie is estimated at $51,000 in the first year alone.

“Makena can help offset some of those costs,” Divis told The Associated Press. “These moms deserve the opportunity to have the benefits of an FDAapproved Makena.”

The U.S. Food and Drug Administration is not involved in setting the price for the drugs it approves.

A KV subsidiary, Ther-Rx Corp., will market the drug. Last week, it announced a patient assistance program designed to help uninsured and low-income women get the drug at little or no cost.

But Snow and others said someone is going to have to pay the higher price. Some of the burden will fall on health insurance companies, which will have to raise premiums or other costs to their other customers. And some will fall on cashstrapped state Medicaid programs, which may be forced to stop paying for the drug or enroll fewer people.

“There’s no question they can’t afford this,” said Matt Salo, executive director of the National Association of Medicaid Directors.

Salo and Snow said they do not know how many state Medicaid programs currently pay for Makena, which as a generic was recommended by the American College of Obstetricians and Gynecologists.

Aetna will continue to pay for the drug, Armstrong said, but it will be an expensive pill to swallow. Aetna currently covers it for about 1,000 women a year, so the new federal endorsement is likely to cost an estimated $30 million more annually.

Makena is a synthetic form of the hormone progesterone that first came on the market more than 50 years ago to treat other problems. Hormone drugs came under fire in the 1970s, following reports they might damage fetuses in early pregnancy. In the 1990s, the early incarnation of Makena was withdrawn from the market.

But the drug got a new life in 2003, with publication of a study that reported it helped prevent early births to women who had a history of spontaneous preterm deliveries.

These very early births produce children who — if they survive — need months of intensive care and often suffer disabilities. The cause of sudden preterm delivery is not understood, but it occurs in black mothers at much higher rates than whites or Hispanics.

The study of women at risk for this condition found that only about 36 percent of those given the progesterone drug had preterm births, compared with 55 percent among those not on the drug.

It’s believed the treatment calms the muscles of the uterus, experts said.

There is no good alternative in most cases and in the years following the study, more obstetricians, Medicaid programs and others began prescribing it. By some estimates, about 130,000 women a year might benefit from the drug. Only a fraction of them get it, but the number has been growing steadily.

One success story is Beatrice

During her first pregnancy nine years ago, Diaz unexpectedly went into labor at about 24 weeks. She delivered a son, Garrison, who was so fragile she was not allowed to hold him for a month. Today he is in a wheelchair and has the mental capacity of a 9-month-old.

It was a shock, said Diaz, who at the time was a legal assistant in a prosecutor’s office.

“ Honestly I thought the only people who had 1-pound babies were crackheads,” she said.

When she became pregnant again, her doctor prescribed the progesterone drug, a weekly injection that starts as early as the 16th week and may be given for as much as 20 weeks. She has since had two healthy, full-term baby girls, Hailyn and Alexa.

Diaz said she’s not planning to have any more children — and that’s a good thing.

“That’s an insane amount of money. I don’t know what I would do to get the money to afford it,” she said.

The Ther-Rx patient assistance program promises free injections or much reduced prices based on income. Uninsured households making less than $100,000 are eligible for a copay of $20 or less.