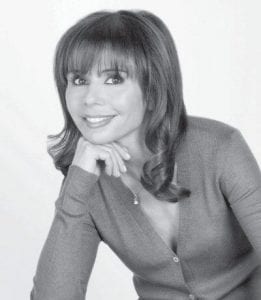 Heidi Murkoff, above, is the author of the hugely successful “What to Expect When You’re Expecting,” the fourth edition of which has just been released. (AP photo)

That woman on the cover of America’s best-known pregnancy advice book doesn’t have a name – she’s only a sketch, after all. But countless women have come to know this expectant mom over the years, with her dowdy clothes and nondescript haircut, staring placidly into space from the safety of a rocking chair.

She needed an update. And now she has one: The woman adorning the just-released fourth edition of “What to Expect When You’re Expecting” sports chic long hair, hip pregnancy jeans (well, as hip as you can get in pregnancy jeans), pointy boots and a formfitting top. She proudly displays her belly. And lo, she stands!

“Pregnant woman erectus – she’s finally off that rocking chair,” quips Heidi Murkoff, author of the hugely successful series she began with her late mother and sister a quarter-century ago. “It was definitely time for a positive spin.”

Some readers would argue the same about the book. Though it remains undeniably popular – it’s been on the New York Times best-seller list for 355 weeks, with nearly 15 million copies in print – the information-packed “What to Expect” has always had some detractors, who felt certain bits of advice were unnecessarily anxiety-provoking, a little alarmist. This new edition, largely rewritten, is a chance to present a version that’s “more reassuring, more positive, more empathetic than ever,” its author says. 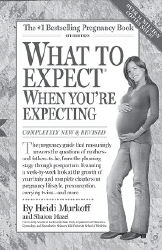 But the revamping raises a larger question: Can this iconic tome ever be as relevant as it once was? Can any book? When “What to Expect” was launched in 1984, it was the only thing of its kind out there – a guide written not by doctors but by women, for women.

Now there are lots of others. But there’s also the big wide Web world out there, and it’s not just all those sites offering medical information. This is the age of the message board, where a woman who has a strange ache or pain at 3 a.m. can fire off a cyberquestion: “Late-night cramps at 5 months pg, dh asleep, what do i do?” Answers come within moments.

“It’s this whole new community,” says Susan Kane, editor in chief of Parenting magazine. “Women are starting to trust one another and not listen to the experts so much.”

BabyCenter. MomCafe. Urbanbaby. Parenting. These and many other sites have become active communities for mothers who are “ttc” – trying to conceive, in Web lingo – pregnant, or parenting babies. And there’s WhatToExpect.com, Murkoff’s 3-year-old site (it’s been free for 18 months), which the publishers say is the second-biggest parenting site after BabyCenter, with 1.7 million unique users per month, citing Internet tracker comScore Media Metrix.

It was because she wanted answers to her own questions during her first pregnancy (her daughter is 25) that she conceived of the book, says Murkoff, who spoke to the The Associated Press one recent morning over breakfast in Manhattan. (Her mother, Arlene Eisenberg, died in 2001, and her sister, Sandee Hathaway, is no longer involved with the project.)

“I could have spent 24/7 on the phone with my OB,” she says, but there were so many questions she was too embarrassed to ask. “What to Expect” shies away from no question, including, in the new book, the proper use of sex toys during pregnancy (just be hygienic) or the safety of bikini waxes (the full Brazilian? Sure.)

In the beginning, Murkoff says, “It was word-of-mouth, mom to mom. I never expected to write a best-selling book.” Now, there are eight titles in the series, with over 30 million total copies in print.

Despite the huge success, mothers like to debate the book’s advice on message boards, and mock titles have emerged such as “What to Freak Out About When You’re Expecting.” On urbanbaby.com one can still find references to the book’s warnings, toned down in later editions, that common fetal hiccups could signal a severe umbilical cord problem and that oral sex on a woman could in rare cases cause a fatal embolism. Also, a “Best Odds” diet for pregnant women was seen as difficult to follow.

Kane, of Parenting, who used the book religiously during her own pregnancies, says she understands those objections, but still, “there’s nothing else like this book. What I love about it is that so many things can happen during a pregnancy, and Heidi covers them all.” She credits Murkoff, who contributes regularly to the magazine, with working hard to improve the book, such as moving “a lot of the scary stuff” to a back section.

Murkoff has also changed the diet, which she says was “a little whole-wheatier-than-thou.”

“What I didn’t realize was that if we expected too much of women, it would send them straight to the nearest McDonald’s,” she says. The new book also has more realistic sketches, week-by-week updates, and more information on alternative medicine, pregnancy sex and multiple births.

“Listen, I can’t please all the moms, all the time,” Murkoff says. “Most women feel it strikes the right balance.” And she notes that she’s never once gotten a letter saying, “Too Much Information.” Usually, she says, it’s even more information that moms are asking for.

Many doctors are happy to recommend it. “It’s a responsible book with good information,” says Dr. Robert Resnik, a perinatologist at the University of California, San Diego, who tells his patients to skim a number of books and find the tone that works for them. “It is what it is. If it scares you, maybe you shouldn’t be reading it!”

But Dr. Laura Riley, director of labor and delivery at Massachusetts General hospital in Boston, says some of the medical advice troubled her so much during her own pregnancy that she eventually wrote her own book (“You and Your Baby: Pregnancy.”) She specifically takes issue with the book not being updated by a doctor (Murkoff says a doctor vets the manuscript.)

Riley also cautions her patients against reading too much on the Web.

“The Internet gives patients the opportunities to be partners in their own health care,” Riley, also on the faculty at the Harvard Medical School, notes. The bad part is that many people have a hard time putting what they read into context. “It’s a huge opportunity for misinformation,” says Riley. “Some people get so nervous, I spend the next visit talking them down from the ceiling.”

Lexy Higgins, a New York teacher, found that the Internet was not a good choice for her as a patient during pregnancy, preferring to use the Mayo Clinic’s advice book. “With the Web, it’s definitely proceed at your own risk,” Higgins says. “Sometimes I couldn’t resist going online, but you really need a grain of salt.”

Resnik, the San Diego doctor, agrees. “For every good Web site, there’s about 9 or 10 that just aren’t useful,” he says. “Unfortunately everybody wants to go to the Web these days.”

That’s what Vicki Iovine is banking on. The author of the popular “Girlfriends’ Guide” series isn’t giving up on her books, but she’s pouring energy now into what she calls a “women’s Web portal” planned for the fall. “I think publishing is dying,” says Iovine, whose first book, the pregnancy guide, came out in the mid-’90s, a decade after “What to Expect.”

“I look at my 20-year-old son and his friends,” Iovine says. “They’re not readers like we were, but they’re on the computer all the time. They’re used to getting a response.”

The Internet is particularly suited for women going through pregnancy, Iovine theorizes. “It’s the most female invention to come along. You put the word out. Someone responds. You say, thanks, you saved my life. Men don’t communicate like that!”